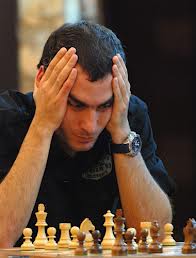 Cuban superstar Leinier Dominguez was born in 1983 and , along with Bruzon and Quesado, has given a fresh new face to Cuba’s chess community.  Leinier recently competed in the Capablanca Memorial in Havana and finished a respectable 2nd/3rd place, half a point behind Hungary’s Zoltan Almasi. Dominguez was also the only undefeated player in the tournament.

Dominguez shares much in common with Capablanca, in particular a thoroughly logical style of play aided with a lethal precision that is sometimes mistaken for uninspired simplicity.
Below is what I consider to be the Cuban’s best effort in Havana.  Featuring a Spanish Opening, the Black pieces seem to fall into an inferior position without making any real mistake…

gm  DOMINGUEZ,L
The Indian star has tried to build up pressure on the Kingside, a common strategy in this particular line.  However, the White piece-setup has cleverly side stepped any tactical tricks and , for the moment atleast, he is free to take the initiative on the other side of the board, where Black is more vulnerable.
15.a4! c6 16.b4!

Should Black do nothing then he risks being steam-rolled on the Queenside.

A strong move that forces open the position for Dominguez’s Bishop pair.  Black has difficulties that he never succeeded in resolving in the game continuation.  Black lost in 43 moves.
This game is worth playing over several times!