Court of Arbitration hands down ruling 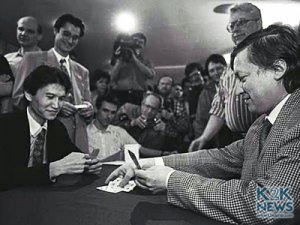 Karpov’s bluff failed
We will probably have to wait a few more days for the Court of Sports Arbitration to officially publish its ruling to learn the precise details (CAS/TAS http://www.tas-cas.org/ ), but FIDE this evening published a summary of the court’s findings (below)  concerning the appeal made by  Karpov’s legal team a few months ago.
It very much appears that the Karpov appeal was absolutely groundless and was little more than an opportunistic and calculated attempt to try to use the good name of the court as a political weapon against FIDE and its current president, Kirsan Ilyumzhinov.
As expected, the court refused to get involved in the messy internal politics  of the Russian Chess Federation (RCF), pointing out that Karpov should have sought a solution thru the Russian legal system instead.  Infact, the Swiss court refused to become involved in politics in any way or at any point.
It had been repeatedly played up in recent months by the Karpov campaign that there was a very real expection that the Swiss court would  effectively disqualify Kirsan Ilyumzhinov, making Karpov the defacto President of FIDE for the next 4 years.
Just an hour ago I learned from  the official  Karpov campaign web site (http://www.karpov2010.org/) that while the court’s  decision had been communicated to Karpov, he stubbornly refuses to accept that he was mistaken in asking for a resolution.

Monday, 27 September 2010 19:42
http://www.fide.com/component/content/article/1-fide-news/4795-fide-won-the-case-against-karpov-2010-inc-and-five-national-federations.html
FIDE won the case against Karpov 2010 Inc. and five national federations.
Late last night, the Court of arbitration for sport (CAS) issued its decision in the arbitration opposing FIDE to Karpov 2010 Inc. and to five national federations. The CAS main rulings are as follows:
The majority of the Panel considered that it has jurisdiction to decide on the National Federations claims. On the contrary, it ruled that it has no jurisdiction with respect to the claims made by Karpov 2010 Inc. which was claiming damages which it allegedly incurred as “campaign costs expended by the Karpov presidential ticket”.
Claimants were asking the Panel to find “that Mr. Karpov was validly nominated by the [Russian Chess Federation] as its sole nominee to run for the Presidency of FIDE”. The Panel considered that FIDE had no standing to be sued with respect to this prayer of relief and that Claimants should have commence proceedings against the competent Russian bodies.
Concerning the conditions to be nominated, the Panel reminded that it has always been FIDE’s practice that the membership requirements for candidates on a Presidential ticket were not applied strictly so long as the candidates are part of the “chess family” and that this practice is in line with the text of FIDE Electoral Regulations. In addition, the Panel considered that it is sufficient for a candidate on a Presidential ticket to be a member of any of the FIDE members and that the requirement of a one-year membership is not mandatory but recommendatory. In light of this principle, the Arbitrators considered that it was not necessary for them to decide on the validity of the nomination of the RCF or of other federations.
The Panel therefore considered that it is sufficient for Mr Ilymzhinov to be a member of the RCF and part of the chess family which he obviously is in view of the long-lasting FIDE Presidency. For similar reasons, the Panel stated that it is clear that Ms Marinello, who also belongs to the USCF, has been validly nominated by the federations of Chile and Brazil.
For the sake of completeness, the Panel added that the withdrawal by the Argentinian of its endorsement of the Ilymuzhinov ticket does not affect the nomination filed by it prior to the applicable deadline.
In conclusion, the Panel rejected Claimants’ claims requesting that both Mr Ilymzhinov’s and Ms Marinello’s nominations be deemed invalid and, accordingly, rejected Claimants’ that Mr. Ilymzhinov’s ticket be disqualified from the election.
Claimants were also alleging that “FIDE has breached its obligations to act with impartiality towards the candidates and to conduct the election in a fair manner”. On that issue, the Panel considered that the testimony heard did not produce proof of an impartial and unfair conduct on the part of FIDE. On the contrary, the FIDE Secretariat alerted the Karpov’s ticket a few hours before the lapse of the term for nominations that a certain signature was missing. The Secretariat would certainly not have acted in this manner, the Panel said, had they intended to unfairly help the ticket of Mr. Ilymzhinov.
Despite this positive outcome, FIDE deeply regrets the FIDE resources spent on its efforts to have this frivolous claim dismissed.
______________________________________________________________ 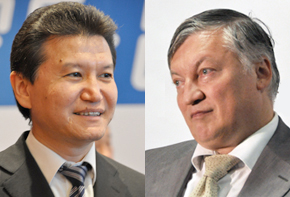 Needless to say, the court’s decision comes as no surprise to me.  Why should any international sports arbitration process be influenced today by internal Russian politics?  Having closely followed the election since Karpov first announced his candidacy for FIDE presidency earlier this year, I can only express my disappointment in Karpov betraying his many fans’ trust and patience.  Karpov started the campaign as a huge underdog, running against an immensely popular figure (Kirsan Ilyumzhinov).  When he realized that his campaign was unable to win over the loyal support that Kirsan had established these past 15 years, the campaign turned ugly and then uglier.
Rather than throw in the towel, Karpov and Kasparov  began a campaign of character assassination of internationally respected chess personalities who would not join or support their campaign; they systematically worked to undermine democratically elected chess officials in Peru and Argentina by using the tremendous influence that they wielded by way of their cult personalities, and celebrity status to gain easy access to political figures who were ignorant of chess affairs and of chess politics.  These campaign tactics were nasty, abusive and unprecedented in FIDE’s long history.
It is very likely that the damage to Karpov’s reputation is irreparable.  It must still be studied if Karpov has any prospects of winning an election in 2014 (when it is rumoured Kirsan will retire), but most certainly the chess world will never look at Karpov the same way.  Karpov ran an undignified campaign.