Chess finds it hard to compete for attention in the media

Ofcourse, chess never was much of a star when it came to competing for space and time in the media. What normal non-chess playing person had ever heard of Alexander Alekhine or Mikhail Botvinnik? Or Misha Tal or even Boris Spassky before 1972?   Things changed dramatically when Fischer sat down to play Spassky in 1972, at the height of the Cold War, however, when the game of chess was catapulted onto the front page of every single newspaper and television set for 2 months straight!

The Fischer vs Spassky match was the single biggest news item in the world in 1972 with the exception of the Munich massacre of Israeli athletes.

Perhaps it was just the glimmer of hope that the 27 years of fever and paranoia of the Cold War might one day be resolved in an arena other than a nuclear battlefield that explains why chess became very fashionable.  Whatever the case, for the next 2 decades chess experienced an unprecedented place of prestige and respect in the media.  Karpov and Kasparov became household names that even farmers in Utah would recognize!

But gradually the Fischer-momentum subsided.  Fischer retired. The Berlin Wall came down in 1989, effectively ending the Cold War.  Kasparov broke away from FIDE, creating 2 World Champion titles and a lot of confusion.  FIDE became a 3rd rate organization with the advent of Ilymuzhinov.  Corporate sponsorship began to evaporate. Hundreds of chess columns in newspaters disappeared…you know the story.

The Topalov vs Anand match in Bulgaria had a 2 million euro prize fund and , while a  huge success amongst hundreds of thousands of chess fans all over the world, was barely covered by the non-chess media.  Not once did this writer see a TV news item on what was happening in Sofia.

The truth is that our little game, with a history of thousands of years, is being forgotten in a world increasingly focused on changes, tecnologies and being able to quickly adapt to the future.  Chess is as much a sub-culture today as when I first started playing the game in the pre-Fischer boom years.

Let’s take two examples.  This past weekend a chessboxing tournament was organized in England at the Boston Arms.  It had been advertised for months before…

The spectacle was held on the 15th.  Today is the 18th, and I still can not find any news on what happened!  I googled for better part of half an hour, trying all sorts of combinations of words…but NOTHING! Granted, chessboxing is a pretty bizarre sport, but not even the promoters have been able to break into the media world with any news… 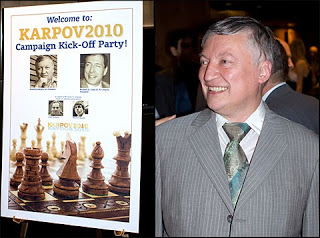 And then yesterday’s Karpov2010 Trump-Soho VIP Kickoff  was not such a big thing either.  I googled again and did not find any major news service cover the event this morning.  At least there was a youtube video of some people playing chess during the party.
Despite Kasparov’s energetic efforts last Friday in Moscow to get attention to Karpov’s campaign, it seems that the media is not in such a rush to meet this morning’s deadline for publication.  Perhaps later today or tomorrow an article or two on the gala  will find its way into mainstream media.  Perhaps not… 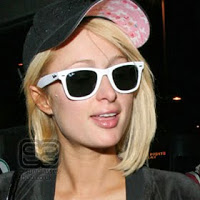 Worse still, not even Paris Hilton showed up!