http://cappelle-chess.fr/fr2/default.php
Once more I must apologize for not updating the blog more recently, but the difficult schedule of the Cappelle tournament–rounds starting right after lunch and taking place some 10 kms from my hotel– combined with the hotel’s wifi problems has made it impossible for me to be a more loyal blogger…
In coming days I will have everything updated and back at the usual state of affairs.  Here is an excerpt from my game from yesterday.  (I have corrected the pgn-viewer and now the correct game score is there)

The position after 21 moves.  White had refused a draw offer the move before and played the aggressive 21.g4, starting serious Kingside operations, and planning to play Nf5.  Black’s last move was 21…Rf8, threatening to blow things open at some point with …f5.
Here I thought a bit.  My first idea was to play 22.Nf5, and if Black takes the Knight I will open the g-file and later play Rg1 with strong attacking pressure.  What I thought was the principal line was  22…Nxf5 23.gxf5 Bxf5? which loses to 24.Bxd5! Rg6 25.Kh2  and Black has nothing for his piece.

Here my opponent was very quiet at the board and I began to become suspicious. I was just about to move my Knight to f5 when it dawned on me that perhaps Black might take the Knight on f5 with his Bishop (instead of his Knight).  It was here that I began to realize that my opponent had set a deep trap for me!


Realizing all of this, and having to deal with Black’s threat of opening the f-file, I played the very strong 22.Be3! (neutralizing the pressure on my f2 square).  White has a small positional advantage and in the next half dozen moves I built up a very strong advantage.  I missed a win right before the time control on move 40, and instead the game continued for another 40 moves or so…all very unclear, complex and messy.  With the fast time control and 30 seconds a move, both players missed better moves.  I eventually prevailed.  A very passionate struggle!
[Event “”]
[Site “Cappelle la Grande FRA”]
[Date “2011.3.3”]
[Round “”]
[White “Spraggett,K”]
[Black “Teske,H”]
[Result “1-0”]
[Eco “C54”]
[Annotator “”]
[Source “”] 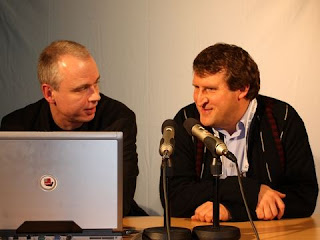 GM Henrik Teske was born in East Germany in 1968 and is one of Germany’s best known players and journalists.
Share