http://cappelle-chess.fr/fr2/default.php
I apologize to my readers for not having updated this blog more frequently these past few days, but as already explained my hotel has wifi problems.  On top of this, the first few rounds of Cappelle are particularly awkward as each of the first 4 rounds start at a different time! (16:00, 14:00, 9:00 and 17:00)  In essence, we play 4 games in just a bit over 2 days!
However, I have found a nice pub that has wifi, and during lunch I have found a few moments to give some details of how the tournament is going for me.  Unfortunately, I have not been able to watch the other games–there are so many great players here–but before the tournament is over I shall offer a sample of the kind of chess here.
Here is my 2nd round game

GM ZAGREBELNY
My second round game was against the solid and experienced  Uzbek GM Zagrebelny.  I tried to play a complex game and chose the Alekhine’s defence.  Probably I could have played a bit less risky in the opening, but I achieved a playable middlegame, if somewhat passive. 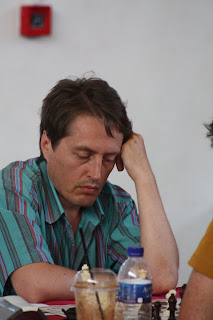 At one point I decided to weaken my pawn structure in order to gain some squares for my pieces.  My opponent refused to play actively (a3 and b4 at one point; g4 at another) and instead slowly but surely built up his position.  In the diagram above, both players had about 5 minutes on the clock inorder to reach move 40.  White threatens Nd4 forcing favourable exchanges.
I should play 30…Ne4!, not fearing 31.Bb6 Qd7 32.Bxa5?!  Rb8! 33.Nb6  Qc7! with advantage.  But I simply did not see this!  (It is in positions like this when having a chess engine is very useful)
Instead, I played the weaker –but equally complex–a4!?, and my opponent was not able to find the best moves.  I slowly outplayed him and when time control was reached I was a pawn up, which I converted on move 63.