http://cappelle-chess.fr/fr2/default.php
Well I survived the first 4 rounds despite little sleep!  My score is 3-1.  Today starts the middle round of this wonderful traditional tournament.  My opponent today is the strong French IM Anthony Wirig. 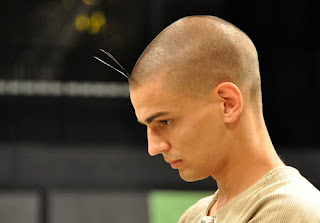 Wirig:  an IM with antenae
Round 3 saw me up against the super-solid Russian GM Igor Naumkin, who had demolished a 2600-plus GM the round before. A while back Naumkin was counted amongst the world’s top 60 players.   I decided to play 1.e4, a sound decision for a morning round game (the round started at 9:00 am) since any opening inaccuracy –caused by night before excesses (?!)–would be swiftly punished. 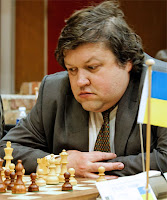 GM Igor Naumkin, born 1965
Naumkin usually plays the Open Spanish or some variation of the French Defence against 1.e4.  Today he played an unusual line of the Winawer French where Black avoids playing …c5 in the opening.

Some of the younger Russian GMs have been experimenting with this system in recent years, with good success.  Black intends to exchange his light square Bishop and then try to post his Knights on unassailable positions before opening up the c-file.
I have some experience with this line, having won several nice games in recent years, my game from the 2005 Continental Championship (Buenos Aires) is particularly instructive (below).  However, nothing is ever simple and it is always a  very hard fought struggle.  White usually gets an early initiative but then comes up against the ‘wall’: Black’s position can not be cracked by direct means.  Tactical inventiveness and alertness is of extreme importance in the middlegame.
[Event “Ch American Continent”]
[Site “Buenos Aires (Argentina)”]
[Date “2005.8.16”]
[Round “11”]
[White “Spraggett Kevin (CAN)”]
[Black “Rodriguez Andres (URU)”]
[Result “1-0”]
[Eco “C16”]
[Annotator “”]
[Source “”]

GM  SPRAGGETT
I prefer White’s chances here:  He has more space and the Black Rooks can not find active play.  Especially, the Kingside belongs to White.  Black’s only active play will involve playing …c5 at some point, but this is a very double edged decision and will offer White chances on the Queenside as well.
But the question is how for White to proceed?  I did not find the right plan.  I believe that at some point White must play f3 and g4; then post his Knight on g3.  Should Black then exchange his h-pawn then White will get a passed h-pawn.
However, timing is of essence.  White should now play slowly with g3, Kh2; post his Queen to d3 and his Rook on e1.  Then, depending on what Black does in the meantime, White can then proceed with his long-term plan of f3 and g4 and N-f1-g3.
In the game, however, I played too quickly (morning rounds!) and started my Kingside play too early, allowing Naumkin to establish a position where I could not make any progress:

If White tries to bring his Knight to g3 then Black will slot his Knight into c4 and then play for the break f6 and e5. I would risk that Black could be better  because my King’s position is insecure and vulnerable.  The game was soon drawn by repetition when Black threatened to open the position with f6…and I felt I had no choice but to prevent it.

In round 4 (the second game on Monday) I was paired against one of the strongest female players in the world  WGM Harika. I had played here twice before (in Gibraltar 2007–where she crushed me!) and in Lorca 2008 where I got my revenge) 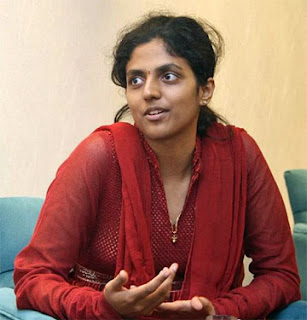 The line with c4,d3 and e4 (against Black’s set up) is a well known line that is not very dangerous but has a reputation for very strong drawish tendencies. Few modern tournament competitors play this way because of this. However, if White wants to fight then 15.a4 would lead to complicated play with mutual chances.