Capablanca on why he lost the world title

From an old interview…

Below are excerpts of an interview  Hermann Helms , a chess journalist with the Brooklyn Daily Eagle  conducted with Capablanca on  12 February 1928, just a few months after the latter lost his title to Alekhine in Buenos Aires.  I found this interview at Winter’s Chess History.  (More precisely, entry 7134)
I have taken the liberty to add some photos and games, for the convenience of my readers, so that they can more easily relate to what was written in the interview.  Enjoy! 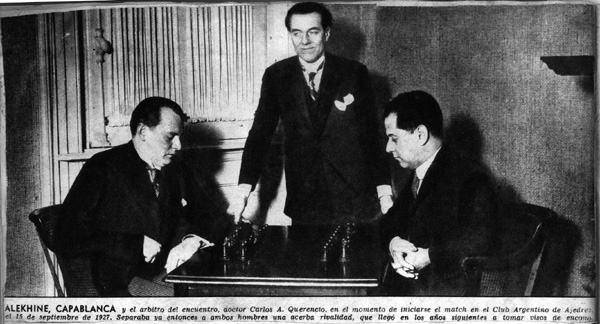 ‘Then things happened.’
Ten months is not a long time, but things can happen. They have happened. Capablanca can no longer claim to be cock of the roost, let alone a lone eagle. He is not in a class by himself. Many there were who thought so.
He has company now, for there are others. Worse than that, the world title is no longer his. Small wonder that fickle Havana took to herself a new hero, Lindberg has a way with him that sweeps people clean off their feet. With Capablanca away he had a walkover.
The middle of September saw the beginning of hostilities between Capablanca and Dr. Alekhine of Paris at Buenos Aires. On November 30 came the end, and Capablanca’s finish. What had happened to Dr. Lasker in Havana came to Capablanca in South America.
There the sceptre passed, and the Russian reigns supreme. How it feels to be an ex-champion is a new experience for the loser. Now he knows. The medicine was bitter, but perforce he gulped it down.
Ordeal still ahead of him
The ordeal of facing the home folks is still ahead of Capablanca. It’s not pleasant to contemplate. More than two months have passed since Alekhine took his measure. That’s time enough in which to reach Guam. He is now in New York. Last Wednesday the good ship Voltaire nosed its way through the thick fog into port. Havana is but three days distant. It will not be long now before he’s home.

Built as a passenger ship in 1923 in Ireland, and then converted over to armed service during the II World War, the Voltaire operated out of Halifax and was sank by U-boats in April 1941

Oddly enough, at the moment this edition of The Eagle goes to press, Capablanca is on Brooklyn soil. He is putting on the finishing touches to his exhibition at the Brooklyn Institute. Of all the boros in New York city, this is the only one thus honoured. Philadelphia had him Friday night.
Tomorrow a comparison will be in order. On Febuary 12, 1915, exactly 13 years ago today, Capablanca, buoyant in his youthful vigor, was the center of attraction in the memorable Eagle Auditorium exhibition. So much for reminiscence.

Capablanca comes back from South America a beaten man—a wholly new experience. He was defeated by 6 games to 3. There were 25 draws. His spirit is not broken. One would not expect it of him. A strong nature such as his stands up under adversity. Confidently he looks forward to 1929. He expects then to be again in the ring. The horizon of his vision is tinged with rays of brightest hope.
When the Cuban returned here there was much that needed explaining. He’s a good talker, and, like most Latins, a fast one. Temperamentally he is not good at explaining. He prefers to shrug his shoulders.
‘’Psaw!’’ the shoulder blades seem to way, ‘’what’s the use.’’

There are so many better things for a young man to do than to think up excuses. Hold! Was it ‘’young man’’ we said? Wasn’t it a cable from Buenos Aires that spoke of Capablanca’s advancing years? Or are we just dreaming it? No: consultation of the files seems to bear us out.

Capablanca was about to leave the Alamac, his New York home. Soon he would be enroute to Philadelphia. A man with a train schedule on his mind is not the best subject in the world for an interview. However, that question had to be put, train or no train.

The Alamac Hotel
‘’Are you feeling the effects of the passing years?’’ he was asked.
‘’I must have been misquoted,’’ was the reply. ‘’I did not say that. What I did say was that I no longer possessed ,either mentally or physically,the great resisting power that formerly enabled me to succeed. I wish newspapermen would be more carefull.”   (Capablanca)
Alekhine’s Good Play Chief Cause of Defeat

‘’To what do you ascribe the loss of the match to Dr. Alekhine?’’  (Hermann Helms)
‘’Chiefly, the good play of Dr. Alekhine.’’  (C)
‘’Was there not something lacking in yourself? Did not the result surprise you?’’  (H.H.)
‘’I confess it did. I never dreamt that my former good form could fail me at such an inopportune time. But Dr. Alekhine is worthy of any man’s steel. If you don’t believe it, try it.’’ (C.) 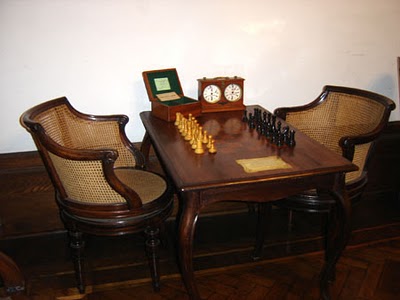 The original chairs, table, chess pieces and chess clock of that historic match are preserved at the Argentino Chess Club in Buenos Aires.

‘’Just how do you explain it?’’ (H.H.)
Somewhat reluctantly, it seemed, the world-famous player answered: ‘’I cannot fully explain it and I hate alibis. The fact is that I was not my normal self and I made mistakes that now that I look back upon them are quite unaccountable.’’  (C) 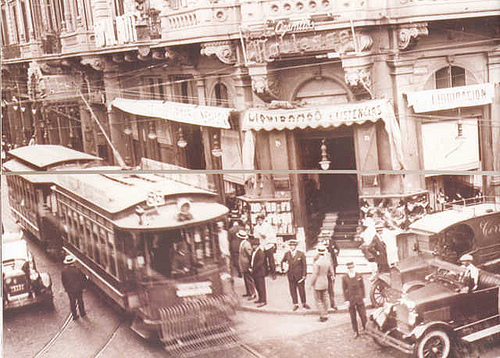 ‘’Which of the 34 games gave you the most satisfaction?’’ was the next question.

‘’Naturally, it pleased me to win the third, seventh and 29th. They bettered my score. The 29th was especially well earned, if I do say it myself. However, the 27th, which Dr. Alekhine drew by perpetual check, was a real disappointment to me. ‘’At last,’’ I said to myself, ‘’I am beginning to get my form back.’’

”But what happened? After outplaying my opponent at all points and getting him badly tied up, I allowed my hold on the position to slip. First thing I knew, he was escaping from the toils and then, to crown it all, I moved my King to the wrong square. It was disappointing. I knew that the jig was up.’’   (C)

INSTEAD,  Capablanca erred with 38.Kf2? overlooking that after 38…Qd2-ch! Black has a perpetual check.
‘’Do you care to comment upon any other games?’’  (H.H)
‘’That’s really a subject to be dealt with in a book. No, I’m not thinking of getting one out. The match book most likely will be undertaken by Dr. Alekhine. He has a great liking for that sort of thing, and he does it well.’’  (C)
‘’But the twelth game: was that not way below par?’’  (H.H)
‘’Yes, that was shocking, I cannot recognize myself as the player who lost it. I have seen it suggested that I should have sacrificed the exchange and won. It was easier said than done.
The possibilities were deeper than lay on the surface. Besides, I did not feel up to the mark that day and I played conservatively. Later on, I blundered and lost.’’  (C)

The position in the 12th game where Capablanca could have sacrificed the exchange occurred after White’s 21st move (21.Nc5):

‘’A young compatriot of yours has pointed out an ingenious continuation in the 11th game which would have assured you a draw.’’  (H.H)
‘’He was right. It was the 47th move. I showed it at Buenos Aires, right after the game. I did not miss it, but discarded it for another I thought ‘just as good’. Later I found out differently. And so it goes.’’
(C)
WHITE TO PLAY HIS 47th MOVE IN THE 11th GAME:
GM  Alekhine

Here Capablanca played the natural 47.Qd7?, which eventually lost.  Instead, a relatively easy draw could be had after 47.Rd7! , chucking the f-pawn:

47. Rd7! Qxf2 (47… Rf8 48. Qe3! and Black must be carefull not to get the worse of it ) 48. Kh1! Qa2 49. Rd8 Rxd8 50. Qxd8= Kh7 51. Qf8 Qd5 52. Kh2 Qd2 53. Kh3 Qd7 54. Kh2 etc.  Black has nothing better than a pertpetual.
The whole game (with some commentary) can be seen here.
Little Mystery Left in Present Game.
‘’There is a famous quotation of Marshall’s to the effect that ‘Chess is a hard game.’. You have been reported as having a different view.’’  (H.H)
Without hesitation and emphatically, the Cuban came back with : ‘’The opening of the gema has been so thoroughly analyzed and masters have the middle game combinations down so pat that there is little of mystery in the game for them. Given a clear head and good health, there should be no trouble in drawing a game at will.’’  (C)
‘’Does that apply to all of the so-called masters?’’  (H.H)
‘’No, not yet. Just now I should say there are only two or three of whom that can be said. In time, there will be more. Some of the minor masters a doing a lot of drawing.’’ (C)
‘’Surely, the great mass of chess players are not affected by it?’’  (H.H)
‘’Maybe not, but I think the time is not far away when there will be a demand for a change.’’  (C)
More Squares; more pieces.
‘’What modification would you suggest?’’(H.H)
‘’The board can be changed so as to encompass 100 squares instead of 64. Ofcourse, that would mean the addition of two more pieces and two pawns on each side.’’  (C)
‘’Has any one yet put this to a serious test?’’  (H.H)
‘’Why, yes. Not so long ago I had an interesting letter from Oxford University. Some of the students have experimented with the idea and found that it worked to perfection. They were well pleased with the results they obtained.’’ (C)
‘’How about the immense literature of which chess can boast? Will it not be out of date and shelved?’’  (H.H)
‘’Why so? There will always be devotees of the old game. But those who have trusted too much to their memories will find it harder sledding.’’ (C)
Why P-Q4 Opening was so Often Used
‘’In the recent match the Queen’s Gambit declined was employed always; exclusively. Why was that?’’   (H.H)

‘’1.P-Q4 to a certain extent deprived Black of the chance to pick his own opening. Against 1.P-K4 the up-to-date player who knows what he is about should be able to draw readily enough with the French or Caro-Kann defense.’’   (C)
‘’When do you and Dr. Alekhine meet again?’’   (H.H) 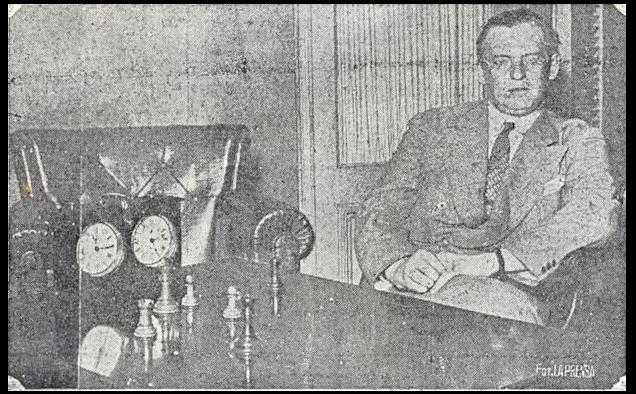 Photocopy of a photo from La Prensa (30 November, 1927) of Alekhine and the final position of the last game of the match, that gave Alekhine the World Title.

‘’Probably next year. We have agreed to that. Meanwhile, a purse must somewhere be found.’’  (C)

‘’Of course you expect to win?’’ (H.H)
‘’I most certainly do. If I am successful,’’ added the ex-champion with a merry twinkle in his eye, ‘’then I shall brook no rivals—not even in Brooklyn.’’ (C)
With that parting pun, Capablanca was off. He grabbed his bag, made for the door and leaped lightly into a waiting taxi.
There were no signs of decreptitude about the movements of the vanishing Cuban.’’
END OF BROOKLYN DAILY EAGLE  INTERVIEW
______________________________________________________________________
POST SCRIPT
The re-match never took place.  Capablanca found the necessary sponsorship  for the 1929 re-match that he talked about in the above interview, but the collapse of the stockmarket that brought about the Great Depression forced the sponsors to back off.
For the next decade Capablanca did everything he could to convince Alekhine to play him a return match, but Alekhine always found excuses to avoid such an encounter.
Both great rivals died at age 53 in the month of March.  Capablanca in New York in 1941.  Alekhine in Estoril (Portugal) in 1946.
Share