Capablanca on his talent and more

Predicted the End of Classical Chess!

To many fans , Jose Capablanca  (1888–1942) was the greatest player of the game.  In a remarkably candid interview granted to  Ed Hughes and published in the Brooklyn Daily Eagle on the 18th of February, 1931  and recently re-published at Edward Winter’s Chess History , Capablanca admitted:
‘’Yes, it (chess-ed.) must have been a gift with me. I can remember playing and beating my father when I was but 4 years old.  I had only  a child’s intuition, but how unerring it was!  You might say I played without knowing how, which also might be a good illustration of genius, natural ability.’’ 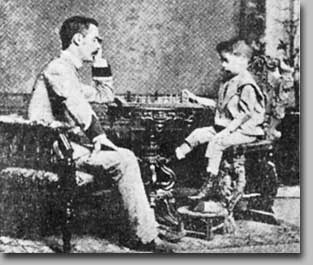 ‘’You can divide masters of chess into two classes.  There is the natural playing type like me and the other that acquires his game through hard work, study , linked with talent for the game,of course.  I have never worked hard at chess, but Dr.Lasker and Dr. Alekhine did.”

E.Lasker (1868-1941) and A.Alekhine (1892-1946)
”They work out their problems in a very methodical, patient, painstaking manner.  That is their style, the way they were made for the game.  Great players of this type pledge themselves to much research work.  By their effort they have scientifically worked out a solution of practically every move on the board….…
I honestly believe that research types like Lasker and Alekhine will completely exhaust the present game in, say, 20 years.  Infact, seeing this, I have frequently pointed out that the board should now be enlarged with the addition of two new pieces.  What a game that would make!’’
Share