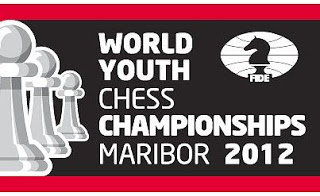 Wealthy Canadian chess tourists understood that Slovenian  weather in coldish November certainly could never compete with the Brazilian tropical temperatures of last year’s Youth Championships in Caldas Novas!  Predictably, many Canadian parents kept their chess-playing children  home.  The result: this year’s Canadian participation was almost cut in half (from 40 in 2011 to 28 this year). 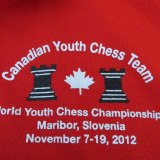 The vital statistics of the Canadian ”team”s performance were also cut in half.  Last year Canada’s youth managed to achieve 4 (four) top-ten results.  This year only 2 (two) top-ten results were registered.

Excellent coverage of the Canadian team’s round by round performance can be found at Michael Yip’s wonderful blog  As well, a facebook page dedicated to Canada’s team is worth investigating, if only for the abundance of photos!

Closing Ceremony with  legendary Garri Kasparov awarding the prizes for the U14.  Left to Right: K.Troff (gold), C.Aravindh (silver) and Richard Wang with the bronze.

HOW HAS CANADA DONE RECENTLY AT THE WORLD YOUTHS?
This year’s championship was  just one more mediocre result in a long history of mediocre performances.  My Canadian readers might want to compare the previous Canadian performances (since 2003) by taking a look at this  site.
In essence, many of Canada’s representatives to the World Youth (WYCC) should NOT be allowed to participate just because they are not good enough to do so.  Some have only learned the moves months earlier; some even lose all of their games. Some haven’t even qualified thru the CFC’s own qualification system, but their parents BUY their way on the team!

As Canada’s newest GM ,Eric Hansen, wrote on a popular Toronto message board :
” We are well known chess tourists…sending far too many kids to the WYCC as usual.  By the way: I never played a WYCC till I was 16. I played in strong adult tournaments instead until I got to the point where I could actually be competitive on the world stage.”

(International master Jean Hebert (who has represented Canada abroad many times, including 2 stints as  Canadian Champion) has also criticized very vocally the practice of sending vulnerable and unprepared children to tough international competitions.  Here is just one such time.)
But the CFC sends as many as they can because it is an important source of revenue:  EACH child who wants to represent Canada at the WYCC but who has not qualified to do so must pay 300 dollars  to the CFC for the privilege!

A SHORT SUMMARY OF RECENT RESULTS:
Ok, so remember that this year (2012) the 28 Canadian representatives achieved 2 top-ten results.  And 15 representatives scored 50% or more. 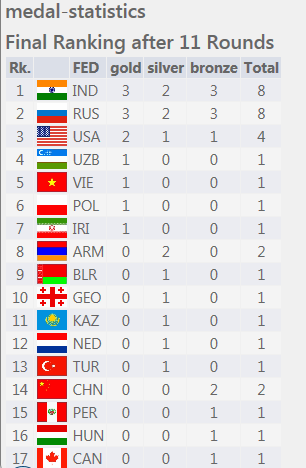 This year India and Russia stood out for collecting the most number of medals, 8 each!  Congrats!  This can mostly be understood as being the result of a deliberate promotion of the game amongst the countries’ youth.  In Russia chess is the national sport and India has the actual world title holder (Vishy Anand).

But how does one explain the result of the American team?  Four medals (!!) for a country that does not place much importance or prestige on chess is quite remarkable.  No doubt the abundance of school-chess programs and chess foundations goes far to explain this year’s excellent result.  The USCF sent 89 representatives to Slovenia (India sent 55).   There are some very wealthy chess foundations in the US (some that contain tens of millions of dollars) whose primary focus is on the promotion of chess amongst American youth today.  It works! 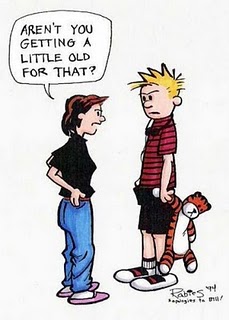 FINALLY, if you take a close look at Canada’s results since 2003 at the World Youth Chess Championship (WYCC) you will find that most of Canada’s chess youth stop participating in the WYCC before the age of 18.  This year Canada sent ONLY one male (unrated!) and one female (rated less than 1600) to the U18 category.  Both scored poorly.  Where were the others?  What is more, in some previous years at the WYCC there absolutely were NO Canadian representatives to the U18!

WHAT HAS HAPPENED?  I think that years of poor (negligent)  WYCC management by the CFC has resulted in most of the youngsters soon enough coming to realize that because of their basic lack of chess qualifications,  years of lack of training and a COMPLETE absence of any rigorous qualification standards, they simply can NOT compete with the 18-year olds from other countries.  And no doubt  they grow  tired of losing…every year their opponents from other countries are getting stronger.

FOOD FOR THOUGHT, no doubt.  Ofcourse, the CFC will continue to be  deaf ,dumb and blind to any expert advice…