Brilliant finish by Flores in Rd 1 !

The Olympiad has just begun and already many fine examples of inspired and well played chess have arisen.
Many thanks to Sebastian Fell (link) for pointing out this beautiful finish by Argentine star Diego Flores over Botswana star Boikanyo!  You can also find more detailed  annotations at the following popular Argentine chess site: link

Black has just played …f5, wanting to drive away the Knight on e4.  Here Flores senses that it is time to cash in on his superior piece coordination and makes an entirely positional piece sacrifice for 2 pawns:
31. Nxd6!

A typical sacrifice in modern master praxis: Black will be up a small amount of material but his pieces will have difficulty to stop White from building up his central initiative along the d-file.
31…Qxd6 32. dxe5 Qe7 33. f4!

The Black Knight on h5 is cut out of play, as well as Black’s Bishop on g7.  In the meantime, White threatens to double along the d-file.
33…Nf8

A concept of rare beauty and courage!  Flores is willing to play a Rook down, having confidence in the strong connected passed pawns which will soon appear.
Note that Black must take the gift since declining it by 34… Ne6 35. Rbd1 Rf8 allows the powerful  36. Qa4!  which leaves Black helpless after 36… Nxc7 37. Rd7 Qe6 38. Rxc7 etc

An inspiring position!  Despite the Rook extra, he finds himself unable to stop the White pawns from crashing forward like an avalanche.
See how the game finished! 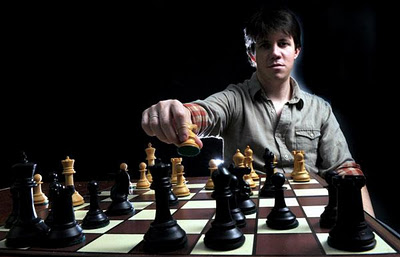