On saturday in a Paris hotel the Discipline Commission of the FFE was convened to judge the accusations of cheating against 3 well known French players (GM S.Feller, GM A.Hauchard and IM C.Marzolo).  The charges were brought by the FFE itself , for unethical behaviour of the said players at the  Khanty-Mansiysk Olympiad late last year. 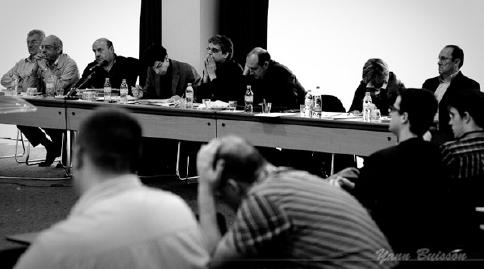 The 3 accused were not present but were represented by their lawyers.  The minutes of the meeting , as were posted by the representative of Europe-Echecs, can be found (in French) at the following link:
http://www.europe-echecs.com/actualites/actualites-compte-rendu-de-la-commission-de-discipline-2583.html
One of the curious bits of information to have been revealed at this session was that in just one of GM S.Feller’s games more than 220 sms messages were exchanged!  Several members of the FFE executive became suspicious during the Olympiad, and on one occasion the president of the FFE (JC Moingt) actually tired to catch the parties involved (but failed).
The FFE presented its case , and then the accused were able to have their say.  Ofcourse, the representatives denied everything and called into cause the entire procedures of the FFE.  All pointed out that the FFE took a very long time before actually deciding to proceed with the case.  One of the lawyers argued that the FFE was not competent to judge the case.
It did little good:  according to the excellent French website http://www.chess-and-strategy.com/  the Commission decided against the accused, who were all found guilty:
The FFE has still to officially publish its decision, but already atleast one of the lawyers representing the players has made clear that he will appeal the decision.
I suspect that the last word has not be spoken yet.  Infact, I would not be surprised if the FFE will find itself facing a multi-million dollar counter-suit.  Stay tuned.
Share