Big upset in first round at Canadian Open!

Visiting GM Dejan Bojkov suffered defeat in the first round of this year’s Canadian Open against Brad Willis, an experienced player and former champion of the Edmonton Chess Club.  The game is given below, and is quite a fascinating struggle.  The GM appeared to have every thing under control and was soon a pawn up, but Willis decided to turn things around by  steering the game into 2-pawn gambit. 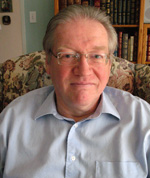 Brad Willis: a very resourceful player!
The game soon became very messy and unclear as Brad started to create direct threats against Bojkov’s King.  Playing all or nothing, Brad then riskily sacrificed an exchange (Rook for Bishop), no doubt sensing immortality should he be able to pull off the upset.  Bojkov then had just one slim chance to come out on top, but missing this resource the Edmonton player then crashed thru with a brilliantly concluded finish.  Bojkov resigned in a hopeless position.
Brad is a regular reader of my blog and we have exchanged a number of emails over the years.  Today Brad wrote:
”You will have to accept part of the responsibility for your colleague’s defeat, because your blog helps keep me fired up about tournament chess, and believing that I can still make further progress in understanding and playing the game, despite the all-too-rapid onset of decrepitude.
From my point of view, it feels a bit like a beer-league wannabe might feel hitting a home run off a major-league pitcher. You know he’d probably strike you out each of the next twenty times you faced him,but hey – it can’t be gainsaid, it’s a home run!”

Black has built up considerable counterplay on the Kingside, and now by continuing with 28…Qh6 or 28…Bd7 Brad could make White’s defence very difficult.  However, Brad saw a brilliant idea that –unfortunately–has a slight drawback:
28…RxB!?!?
The idea is to clear the path for the Bishop on c6…notice that the White King is at the end of this diagonal!

No doubt flustered by Black’s bold play, the GM now misses the chance to turn the tables: 30.Qc4-ch! K(anywhere) 31.b5! and 32.c6! shutting the Bishop out of play.  Instead, Bojkov played the natural looking 30.f3 (trying to block the diagonal in another manner) and soon went down in flames, Brad not giving his illustrious opponent another chance!