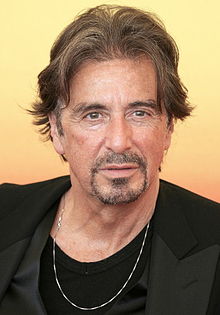 Doesn’t that make you feel soooo…old?  Al Pacino turned 71 years young yesterday.  One of America’s greatest film stars whose credits are too long to list here.  I loved each and every role he played.  Each time he was a different character, a different personality.  Each time was so convincing…wow.

”Al Pacino has a different natural style of humor. He’s one of America’s finest dramatic actors, but offscreen he’s a funny guy: New York funny. He has that New Yorker’s reaction to things, the ability to shrug off so many of life’s threats and dangers because they are surrounded by threats and dangers all the time right there in their own hometown.
We were standing in the lobby of the Beverly Wilshire Hotel in Los Angeles with Walter Cronkite, Pele, and others, only a few hours after the terrible earthquake in January 1994. We were in town for a cable TV awards banquet the night before. So we were each telling about our own reaction when the quake hit. All of us were shaken-at least I was. But Pacino shrugged and said, “I’m from New York. I thought it was a bomb.”    —LARRY KING

”I think he projects such power because of his total lack of egocentricity. A lot of actors want to be sexy, cute, adorable…do anything to win an audience to their side…cater to every cheap, trendy, obvious appeal that will make them laugh. Al couldn’t care less. He’s too honest, and he loves the characters he plays too deeply to go in for that sort of thing. That’s why he can turn acting into poetry.”   —Jill Clayburgh

Personally, my favourite part of any Al Pacino film are his monologues…so Shakespearean!  This is from the film Any Given Sunday

”The actor becomes an emotional athlete. The process is painful  …my personal life suffers.”    —Al Pacino