The Green Bay Packers are today a modern, successful franchise with a huge fan base.  Almost all of their home games are sold out.  They have won 12 league championships. Their best players are not just revered as stars, but are well paid!  But it was not always so…check out the 1944 player’s contract below 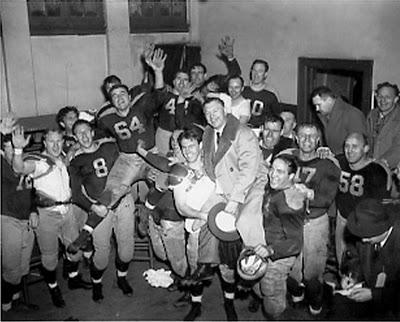 The Green Bay Packers were the 1944 NFL Champions!

According to his biography in the Northland College Hall of Fame of Ashland, Wisconsin, Edward “Mac” McGroarty was both a football and basketball star for the college. He graduated in 1939 and went on to play with Green Bay and Cincinnati before a career-ending knee injury. However, in looking at the 1944 and 1945 Green Bay rosters his name does not appear, nor can I find a single Cincinnati pro football or pro basketball team from the 1940s and 1950s. It’s a minor mystery, but a mystery nonetheless.
(Thx, Grant!)
Share