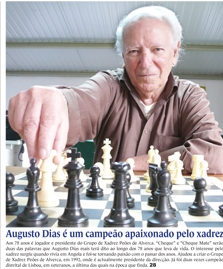 Augusto Dias died suddenly on thursday.  It is a sad loss for all of Portuguese chess.  Founding member and president of  the Grupo de Xadrez Peões de Alverca , aged 79 (born January 31,1935)  Augusto was about as passionate about chess as anyone could be.  On the 12th of this week (Monday) he participated in the first round of the Torneio Xeque MateMática and was in his usual high spirits, motivating his club mates.  I played Augusto several times at rapid tournaments in Portugal over the years–as did my wife Aida and brother in law Antonio– and he was always a perfect gentleman!  My condolences to Augusto’s family and friends. 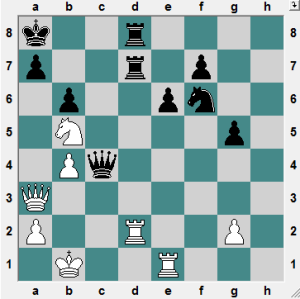 From  Torneio GDCarris-IICircuito Lisboa 2004.10.8.  Position after 33 moves. Black seems to have everything under control and is even a pawn up!  But appearances can be deceiving…