Aronian on fire in Sao Paulo!

Official site (Brazil)   and Official site (Spain)
They call it the Grand Slam of chess.  The Chess Masters Final.  Half in Sao Paulo and half in Bilbao.  The 6 player double-round robbin kicked off today.  The first 5 rounds will be held in Brazil, before moving to Spain.
The rate of play is a ‘luxurious’ 90 minutes for the first 40 moves followed by an hour for the remainder of the game (w/10′ per move starting from move 41).  No draws without the permission of the arbiter (!) and a win is scored as 3 points, a draw as 1 and a loss as 0.
Round one saw 2 boring draws ( Anand vs Carlsen; Nakamura vs Ivanchuk) but the Aronian massacre of the Spanish superstar Paco Vallejo more than made up for it!

Aronian showed up at the board 15 minutes late, claiming that (as in chess) he often over-estimates himself and mis-calculated the time it would take to walk from the hotel to the tournament site!  Link  But once in play, there was no stopping him.  The game was very interesting and even though the Spanish GM tried his best, it very evidently was far off the mark today.

GM  ARONIAN
An annoying little side-line that , curiously, is seen quite often today. White might have to work to get his pawn back.  Personally, I don’t see the virtue of playing this way with the Black pieces in an important game against someone who KNOWS everything in the opening after 1.d4, but I don’t really want to  fault Vallejo’s opening choice…
4. e4 b5 5. a4 b4 6. Nb1 Ba6 7. Qc2!?

No doubt Vallejo must have been surprised by this little move.  Although it is known to the opening experts, it is rarely played and considered inferior to several other natural developing moves.  We can presume that  Aronian had worked this out in the famous ‘Armenian kitchen’!  Indeed, Vallejo soon found himself drifting in the sea without a sail…I mean ‘plan’!

White has got back his pawn and has a beautifully coordinated position!  Black’s pieces are  on the wrong squares: his Queen should be on c7  and his Bishop on a6 should really find a job!  Already around here Aronian must have been day-dreaming of a Kingside attack along the b1-h7 diagonal, but common sense guides him to finish his development first and connect his Rooks.  Aronian does so with energy:

Kaput!  This effectively ends the game.  While Vallejo fought valiantly to the bitter end, it was futile against the Armenian superstar.  A remarkable start to the Grand Slam. 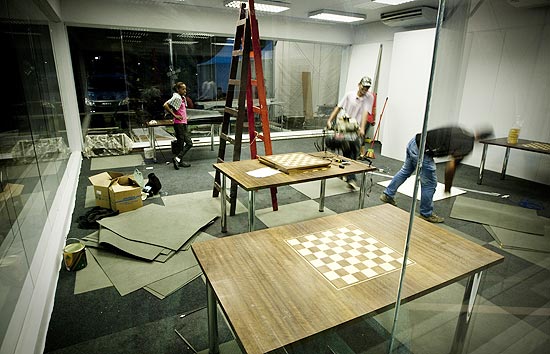 The players are playing in a room enclosed by glass windows, with the specatotors outside.