As reported the other day, Armenia won very convincingly the World Team Championship in Ningbo, China and later returned home to a welcome fitting of national heroes.  The President of Armenia (Serzh Sargsysan )–who also serves as prez of the national chess federation–met the team at the airport and congratulated everyone. 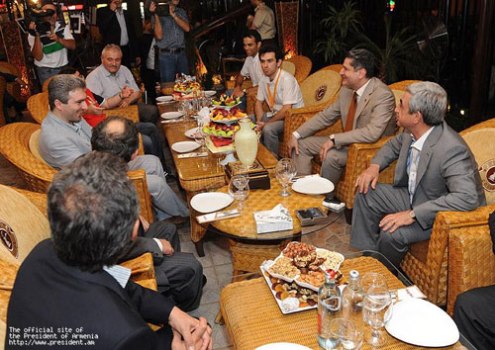 [youtube http://www.youtube.com/watch?v=d2UXRl1quBU]
Chess-mad Armenia’s heroes return in triumph
Link
Armenia’s top chess players, lauded as heroes after winning the 2011 World Team Chess Championship this week, vowed on Friday to boost the small chess-mad country’s status in the game even further.
The team’s head coach said that future successes will be secured through official support and an unusual new scheme to promote the game among schoolchildren initiated by Armenian President Serzh Sarkisian, a keen player who also heads the country’s Chess Federation.
“Because of this attention and care, we can improve our game,” coach Arshak Petrosian told a press conference, two days after returning from the tournament in China to a rapturous welcome from fans and Sarkisian himself at Yerevan airport.
Sarkisian’s government decided this year to make chess a compulsory subject in primary schools from September, investing around $1.5 million (one million euros) in a project to establish Armenia as a global force in the game — a large sum in the impoverished country.
“This is a very important decision for the development and spread of chess in the country,” Petrosian said.

“It doesn’t mean that every pupil will then become a professional chess player, but chess develops logic and teaches people to think flexibly and wisely,” he said.
When the players returned from China on Wednesday, their motorcade was applauded through the streets of the capital by fans carrying flowers and shouting “Armenia! Victory!”
Grandmasters are stars and important match results make headline news in the ex-Soviet state of 3.2 million people, where the progress of the 12-day tournament was followed intently by large numbers of Armenians.
“Our guys showed that a small country can also become a chess superpower,” a pensioner who gave his name as Garnik told AFP, not looking up from his chessboard as he enjoyed an outdoor match in a Yerevan park.
Armenia had already established itself as a serious competitor in global tournaments.
The national team won gold at the biennial International Chess Olympiad in 2006 and 2008, and the country’s leading player Levon Aronian is currently ranked number three in the world, according to the World Chess Federation.