This must be some kind of first in the chess world!  Two men in Vietnam have been arrested for gambling millions of dollars on coffee-house  chess games!   Besides the fact that gambling is illegal in Vietnam except in certain casinos frequented by foreigners,  there had been  a shakedown by one of the players when the other could not pay up more than $250,000 of the pot that he owed.  Criminals were then hired to threaten to kill the entire family unless he pay up the remainder!
Soc Trang police arrest two for gambling in Chinese chess
link to original story
Colonel Phan Huu Thuy of the Soc Trang Province Police Department said yesterday (Dec 29) that the department had decided to take into custody two prominent provincial men for gambling in Chinese chess, for a period of three months.
Nguyen Thanh Leo, deputy director of the Transport Department in Soc Trang Province and Tran Van Tan, director of a driver training center in the province played Chinese chess at the Thy Tai billiards shop in Ward 2 in Soc Trang City, agreeing that the loser would pay VND5 billion (almost US$240,000) to the winner. 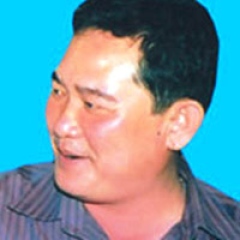 Leo, worried for his family, asked for police protection
The Soc Trang Province People’s Committee has suspended both the above men from membership of the Communist Party, while Leo has been suspended from his official post.
Le Thanh Quan, deputy secretary of the province party committee reiterated provincial leaders’ point of view that the law was above all, and if the two men are found guilty, then they will face harsh punishment.
Gambling for money is illegal in Vietnam except in some casinos where only foreigners are allowed.
Leo told the police that he had played Chinese chess with Tan many times and his losses had accumulated to VND22 billion. He had already paid VND5 billion, but was finding it difficult to pay the rest. Tan then sent hired gangsters to his house to threaten his whole family.

One of the luxurious restaurants owned by Tan
Police have detained Nguyen Thanh Hung and Nguyen Thanh Truyen for questioning. Hung, 50, and his son Truyen had been hired by Tan to force Leo to pay up his debt and threaten to kill all his family members if he failed to do so.
Hung was a loan-shark and a leading gambling broker in Soc Trang, Thuy added. After being threatened, Leo reported to the police who arrested both the men.