Mickey Adams has a lot to smile about.  He leads the tournament after 7 rounds! 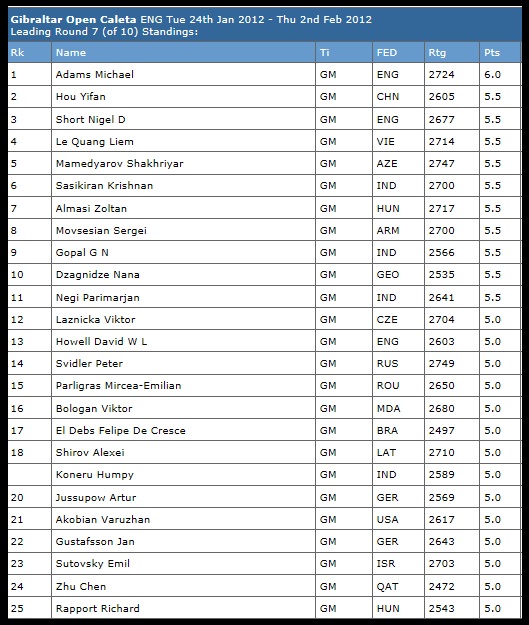 PASSING THE TORCH FROM ONE GENERATION TO THE NEXT

Round 7 of the Gibraltar tournament saw a rare bird: Judit Polgar up against the teenage whiz from China.

Hou Yifan  (ELO 2605)  is the reigning Women’s World Champion and the youngest ever to win the title, as well as the youngest ever female player to qualify for the title of Grandmaster. Judit Polgar is  the strongest female chess player to have appeared in the past 50 years.  On the January 2012 FIDE list her rating is 2710.  Judit refuses to play in women’s tournaments on principle, considering them to be demeaning to women.
Apart from the excitement of seeing both players meet over the board, the match up might also give some indication and insight into  why and  how much the ELO ratings have become inflated over the years.  Refusing to play in ”normal” tournaments for several decades, and thereby ”protecting” her rating, Judit has managed to maintain a 2700-plus average rating. Many of the ”2700-club” do the same.   Meanwhile, Yifan has not shied away from open competition with lower rated players, always willing to risk her rating.