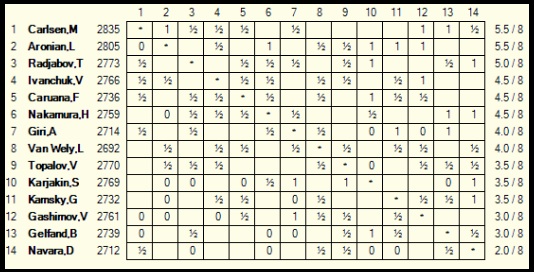 With 5 rounds remaining, Carlsen and Aronian lead the field with 5.5 points, half a point ahead of Radjabov.  Ivanchuk, Caruana and Nakamura follow with 4.5 points.  Former world champion Topalov disappoints with 3.5 points.  Even worse is world champion challenger Gelfand–he has just 3 points and can even count himself lucky!

Gelfand and Kamsky embarrassed themselves in round 8 with a blunderful draw.
POSITION AFTER WHITE’S 24th MOVE
KAMSKY

GELFAND
After some imprecise play in the early middlegame, Gelfand finds himself with his major pieces misplaced.  The Knight sacrifice on f2 has been hovering in the air for the past couple of moves and finally Kamsky gathered the courage to play it
24… Nxf2!

Really there is absolutely no risk invoved as the White pieces must return the material .  To boot, the White King is forced out of its shelter and soon finds himself a sitting target.

Condemned by Gelfand himself after the game.  Weaker are 26. Ng1? Qxh2; or 26. Ne1? Qxh2; when the White King finds its retreat blocked.  The only try to hold things together is 26. Qf6!, but even then White must keep his fingers crossed…

A remarkable position!  White’s King seems to be leading the attack…(!)  Even more remarkable is that a grandmaster of Kamsky’s experience and strength fails to find any of a number of knock-out blows.

The advance of the h-pawn should be decisive.  Gelfand’s next move does not help

Kamsky played the nervous  34… Re4?,  throwing away most of his advantage,  which allowed Gelfand back into the game.  I leave it to the reader to find out how things ended (Kamsky still missed a win or two before finally agreeing to a draw on move 44.)  I simply don’t have the stomach for it!


The game between Caruana and Ivanchuk was a good example of attack and defence in a balanced position: some sharp tactics lead to  a draw by perpetual check.  Neither side could  avoid the draw without incurring extreme risks.
POSITION AFTER 17 MOVES:
IVANCHUK

CARUANA
White is more coordinated and, before Ivanchuk can bring in his Rooks,  decides to grab an opportunity to see if his opponent will go wrong in the ensuing blitz…

A shock move!  Black must not take the bait he would then go under in a fireball:

A cool headed defence!  Now if the Rook retreats to d4 then the Black Queen will return to c7, repeating the position.

Precise to the end!  Down a Rook,  Caruana must give perpetual check
21. Qh5 Nf6

Draw agreed.  White has a perpetual starting with Bd3-ch.