SEARCHING FOR THE WINNING IDEA 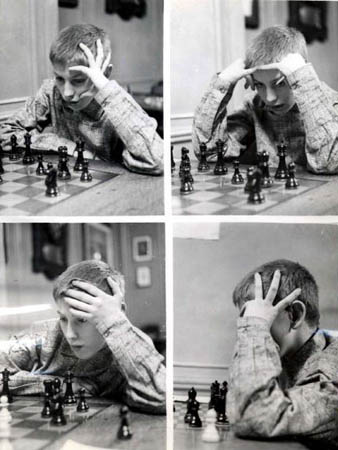 For the young Bobby Fischer nothing was for free.  Only by hard work did he develop his talent.

To rise above your peers talent is rarely enough by itself.  You need to work, and often very hard to achieve this.  Talent plus work is a powerful association.  It may not guarantee you success each time, but sometimes –just sometimes–talent plus work will get you the result that is beyond the expectations of even your most die-hard fans.
Consider the ultimate achievement of the legendary Bobby Fischer.  Today people simply label him a ‘genius’ and think that this explains his incredible exploits.  But this is wrong: Fischer’s results were only ‘genius’-level because of all the hard work put into achieving them!
He laughed off the ‘genius’ label:  “Genius. It’s a word. What does it really mean?   If I win , I’m a genius.   If I don’t, I’m not.”    Bobby Fischer  only believed in  good moves and hard work at the chessboard; not in pop-psychology or magic.  And certainly not in $1  labels…
______________________________________________________________
PRACTICE MAKES PERFECT!

Today I have some hard work  for those young and ambitious players out there who frequent this blog looking for advice on how to improve their game.  Below are 26 positions taken from the recently concluded European Seniors Championship and the Russian Team Championship.  Try your best to solve each one, finding the best move or the winning idea.  The small triangle indicates which side is to move (Solutions later tonight)

VALENTI
Material is equal but White’s position is riddled with Pawn weaknesses.  How can Black use this to his advantage and win material?
2.

GM  J.  PLACHETKA
Black seems to have everything control.  Plachetka’s style  would hardly allow him to  go for after the Black  a-Pawn (too risky!)   How did White win material? What did Black overlook?
3.

COLOMBO
Sherlock Holmes would say ”Elementary, my dear Watson!”  Do you see how Black strikes into the heart of White’s position?
4.

GM   KUPREICHIK
From the European Seniors Championship.  A great attacking game between 2 very strong grandmasters.  Black has provoked his opponent into sacrificing material, having calculated that he can resist after 17. fxg7 Re8!  18.Rxd4  Re5!
What is White’s strongest attacking continuation?  Kupreichik was able to win the game in just 5 more moves!

GM  MOISEENKO
This is a lesson for anyone who does not castle!  Tempting, but wrong, would be 28.Qxf6?? (going for the brilliancy prize–if it existed!) because 28…Qxc5-ch! (28…RxQ??  29.Ng7-mate!)
With what simple brush-stroke did Moiseenko sweep away his opponent?
6.

Black has been slow in drumming up any counterplay while the young Kalmyk GM  built up a strong attack against his opponent’s monarch.  How did White crush Black in just a few moves?
7.

GM  J.  PLACHETKA
Plachetka had a great tournament!  Here the Black King has failed to castle when he could have.  How did the experienced GM and trainer demolish his opponent in just a few moves?
8.

LUSHENKOV
This is instructive!    White should probably retreat his Queen to e1, where upon White would stand a bit worse, but could resist.  Instead, White over-estimated his chances (given that the Black King and Knight are on the same diagonal) and sacrificed an exchange on c3:  22.Rxc3?! (with the idea of 22… Rxc3  23.Qd4 with threats against the Rook and a discovered check against the Black King)
What is wrong with this idea?  (Hint: the threat is often stronger than its execution!)
9.

GM  MOISEENKO
Ofcourse Black is dead lost!  He has no threats and no way to stop White from building up a winning attack against he cornered  King.  But how should White proceed in such a manner so as to finish Black off as quickly as possible?
10.
ZOLOTUKHIN

GM  SVIDLER
Grandmaster Peter Svidler is always a crowd pleaser!  How did he make quick work of his opponent?
11.
GM  BOLOGAN

KONYSHEV
White had calculated that if Black now sacrifices his Knight on g3 to rip the Pawn shield in front of the White King, then he could defend with a timely Rg1. (31…Nxg3-ch 32.PxN Qxg3 33.Rg1!)  What did he overlook?
12.
POKAZANJEV

A hard fought game with both sides seeking complications. Black seems to have cornered the White Knight on f7, for its retreat to e5 will cost a Pawn.  Did Inarkiev over-play his hand earlier?  What is White’s strongest continuation?
13.

GM  NI HUA
Material has been reduced on the Queenside , but Black’s King position is a bit airy and the Black Queen is undefended.  But how to exploit this?  Taking the h-pawn with the Knight allows Black to escape with …Rxh5 (defending the h8 square!)  Moving the Knight to e4 or d5 simply allows Black to take the Knight with the Queen!  And giving check with the Knight on d7 only repeats the position after …Kg8.
How does White win?
15.

White’s last move (22.Rd2) was a blunder.  How does Black exploit this?

GM  ZVJAGINSEV
Grandmaster Zvjaginsev has a very unique style of playing: avoiding main-lines and prefering lesser known variations.  He has achieved great success this way!   But Zvjaginsev plays the middlegame and endgame just like the rest of us: he believes in small advantages and good moves.
In the position above, Black has many weaknesses.  How does White exploit this in the most energetic fashion?
18.
GM  ZHIGALKO

GM  EFIMENKO
An important match game between 2 very strong grandmasters has resulted in a very unusual position where the White King is located on h3 and all of Black’s pieces are centralized.  However, it is the Black King that is more exposed to danger!
How did White proceed?
19.
GM  EFIMENKO

White has strong Queenside pressure (especially along the b-line)  Black must seek counterplay on the Kingside.  In this position, please note that the White King is very lonely…how did Efimenko cheer up the White Monarch?
20.
FROLYANOV

GM  NEPOMNIACHTCHI
One of the best attacking games from the Russian team tournament!   In chess everything is a question of timing…while the Black King position is sound and without weaknesses, many of White’s best pieces are close by.  White must strike with great energy before Black can regroup.  How did the Russian wunderkind continue?
21.
GM  POTKIN

KONYSHEV
The 2011 European Champion (Potkin) has placed his pieces on well centralized and active squares.  Meanwhile, the same can not be said of White’s pieces, which are disorganized and spread …almost randomly.  What should Black do about the attack on his Knight?  Moving to e4 looks good and strong…but is there better?
22.
GM  JAKOVENKO

NEVOSTRUJEV
White has managed to build up a solid positional edge against his more famous adversary.  The strong Knight on c5, the control of the d-file and the two actively placed Bishops on a2 and b2 make a very powerful impression.
How should White proceed?  The question is this: can White win a pawn with 27.Rd8 (threatening 28.Qxf7-ch) 27…Rxd8  28.Qxf7-ch    ?
23.
VYSOCHIN

GM  POPOV
White has won a pawn, but even so it is a tough fight and not easy to make progress because all of Black’s pieces are actively placed and the Bishop on c1 is pinned.  Black should now proceed 30…Nb4!? and after 31.Rd8ch Kh7 White must be careful (…Nc6).  Instead, Black made a mistake with 30…Rc5?  How should White exploit this opportunity?
24.
LINTCHEVSKI

GM  OVETCHKIN
Black is counting on not losing material after 25. Rxb7 RxR 26.Rxa8? Rb1-ch! mating  What did Black overlook?
25.
KOKAREV

A very complex positon!  The exchange means little here for the moment because of the awkward position of the White King.  Even so, after 45.Qe1 (with the idea of Qf2 and Re1) the game would be unclear as White defends against all immediate threats.  If necessary, he can always give up his Rook for the Black Bishop should it one day get to e3.
Instead, White overestimated his own attacking chances against he Black King and played 45.Bc4?

How did Black exploit this opportunity?
26.
NEVOSTRUJEV

Ofcourse White must win!  But how did the young Chinese star do so in style?
Share