Today’s tactics theme is devoted to the noble Knight.  Noble–yes, but at times a NASTY beast!  Hence, the origin of the chess term: knight-mare!

ARNOLD,M
Position after White’s 14th move.  No doubt a matter of first round jitters, here Gareev played the imprecise 14…Nxc3  15.PxN 000 with a sharp game in progress.  HOWEVER, as Raja Panjwani pointed out to me this past weekend, Black can win brilliantly in the position above:

From the US-Championship, position after 29 moves.  A wild game!  Here Stripunsky played imprecisely with 30.Qh4 (threatening a lethal Knight check on h7) 30…Re7! and Black, though worse, is still kicking.
HOWEVER, once again Raja Panjwani pointed this out to me, there is a remarkable and original path to victory here:
30.Rxe4!!  QxQ  (what else? White is threatening Nh7+!)  31.Nh7+!!

gm  SUETIN
Warsaw, 1991.  Position after Black’s 35th move (35…Qg4!?)  BEWARE the combined attacking potential of the Queen and 2-Knights!
Curiously, Black is threatening nothing serious (!) and should White now play 36.Ra1! –removing the Rook from any Knight attack–it is not clear how Black should proceed.  Ofcourse, I think that most grandmasters would prefer the Black pieces here, but careful analysis shows that White should draw with reasonable play.
HOWEVER, we humans instinctively do not TRUST to have so many pieces about our monarch, so Suetin can be forgiven for his next move:
36.h3??

THIS REMINDS ME OF A FAMOUS TAL-GAME…. 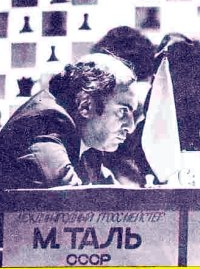 gm  TAL
The Biel Interzonal, 1976.  Position after 36 moves.  The stage has been set for another knightmare:  Tal–in his element–had sacrificed a piece for the attack and now has his Queen and 2-Knights within shooting range of the Black monarch…
37.Nh6!!

Threatening 38.Qg8+!! and mate next move.  Neither Knight can be taken in the position above (forced mate each time).  The best that Black can do is delay the mate…chess engines indicate that it is forced mate in at most 9 moves (with Black desperately giving up his pieces to survive)
So Portisch did the gentlemanly thing:
1-0