We live in increasingly dangerous times

We never really see it put in comparison with other things , but since World War 2 the nuclear industry has quietly grown into what is arguably the largest business known in modern history.  We are talking about multi-trillions of dollars of investments: military hardware (subs, warships, weapons, reactors), medicine, civilian power-plants, etc.

The US, Russia, Germany, China, India, Pakistan, England, France and Israel have spent a significant percentage of their GDP in research and development (though secrecy issues cloud this). Most of France’s energy is provided by nuclear energy.  And Japan.  Let us not forget about Japan: the Fukushima incident earlier this year has quickly disappeared from the front pages of every major newspaper and media-service.  Why?  Some say it is a cover-up to try to protect the largest industry on the planet from imploding. Better to sacrifice a generation or two so as to save big business… 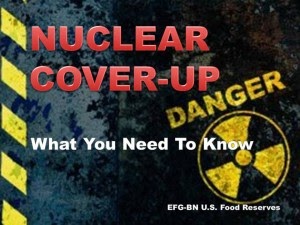 (with thanks to Tony Deline)
Fukushima and the Battle for Truth

Professor Busby is a member of:


”On 30 March 2011 Busby first appeared on Russia Today stating that the Fukushima Nuclear Disaster was worse than being reported. During the follow up interview on April 13, 2011, Busby stated that Fukushima radiation pollution could cause up to 400,000 added cancer cases among those living within 200 km of the reactor, with ” reports of significant radiation … even south of Tokyo”.
On April 25 Busby stated on Russia Today that he believed one of the explosions at the Fukushima I nuclear reactors was a “nuclear” one, rather than a hydrogen explosion as reported. In the same Russia Today broadcast, he referred to calculations made with his colleagues estimating that Chernobyl had killed 1,400,000 people, and that Fukushima’s death toll would be in the same range, if not worse.”