HOW TO CRUSH A GRANDMASTER IN 21 MOVES!

While the recently finished Philadelphia International was a great success for Toronto IM Leonid Gerzhoy (scoring a phenomenal 8 points from 9 games), the prize for the biggest upset must surely go to 20-year old Alisa Melekhina for her 21-move win in round 2 over mutiple-time US Champion  GM Alex Shabalov.
The opening was the popular Alapin Variation against the Sicilian defence (1.e4 c5; 2.c3!?).   It is known that White can get some tricky attacking chances here, and Black needs to be very attentive to White’s ambitions on the King side.  Shabalov played his Queen to c7 on the 12th move , instead of Sveshnikov’s recommendation of 12…Qa5, but he seemed to have everything undercontrol.  Melekhina played directly to increase the pressure and the first critical position was after White’s 16th move (16.Bf6!?)
GM  SHABALOV

A fascinating position that requires a cool head from both players. While this position is known to the opening theoreticians, the experts have yet to come to a definite conclusion.  The last move establishes an outpost on f6 and sets into motion several tactical threats involving a manoeuvre of the White Queen to h6.  the question is how should Black proceed?

According to my electronic chess partner,Mr. Houdini, Black might be able to force a draw with the  remarkable move  16… Nb4!?
ANALYSIS

All of the moves are forced so far, and it is clear that Black’s position hangs by a thread!
19. Qxh5!
ANALYSIS

White does not have better than a perpetual check!  Trying for more would probably end up losing….
RETURNING TO THE ACTUAL GAME:
Shabalov decided upon another plan (to play along the d-file), which is also reasonable
16… Rfd8!? 17. Qe3 Rd7 18.Rad1
2nd critical position

For the moment Black defends against the Queen intrusion on h6 with …Bf8, but White has other attacking options available now that all of her pieces are developed.

Even though Black lost, his position would be quite defendable after 20…h6.

HOWEVER, IN THIS POSITION SHABALOV WENT ASTRAY AND BEFORE HE KNEW IT HE WAS DEAD LOST:

Shabalov must have miscalculated, for now there is no defence to 22.Qh6.
[1:0]
A blistering defeat! 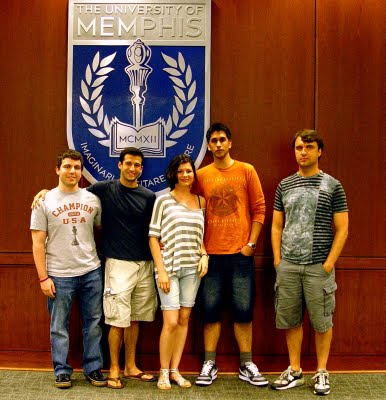 Here is a recent photo of Alisa at a chess-camp in Memphis.  She is flanked by (left to right) GM R.Hess, FM T.Coleman, IM R.Panjwani and GM A.Stripunsky.

Beginning to play chess at age 5, FM Alisa Melekhina has represented the US in eight consecutive World Youth Chess Championships, in three Pan-Americans, the World Juniors, and the World University Chess Championships, placing in the top 10 several times. She was the youngest player invited to the 2007 US Women’s Chess Championship, finished tied for third in the 2009 Championships, and remains the youngest player once again in the 2011 US Women’s Championships. Her biggest chess accomplishments are the gold medal at the 2009 Women’s World Team Championships held in Ningbo, China, and an International Master norm earned in 2008. Alisa has also been active in ballet and dance since in the age of 6, but after earning her bachelor’s degree in philosophy at 19, she will be focusing on starting law or graduate school in the fall.
(Source)