http://wyco2010.tsf.org.tr/
With a very busy chess year coming to a close, I suppose it is not too suprising that only 18 countries showed up to participate at the World Youth Chess Olympiad (Under-16) in Burdur,Turkey. This team championship (each team has 4 boards) takes place between November 26 and December 5, and is run as a 10-round swiss.  Rate of play is 90 minutes plus 30 seconds per move. The pre-tournament favourites include Russia, Armenia and India.

Turkey has one of the most experienced chess organizations in the world.  Each country has free room and board for its players (plus captain).  By all accounts, everyone is very happy with the conditions, and many side-trips and side-events are planned.
The official website (above) gives a fair amount of informatin, photos and videos,  and usually the pgn-file of the previous round is up within a couple of hours of the finish of the round. I haven’t been able to get the live-games feature to work for me, but that might just be my own problem.  I recommend the readers to take a look at the site!

GM Artur Yussupov (l) is just one of the many trainers/captains attending.  The gentleman on the right is Yakup Bayram, a trainer for Turkey.

I recognize GM Misha Gurevich on the far right.  He today plays for Turkey.
Canada and Portugal are also participating.  One of my most talented pupils here in Portugal (Jorge Ferreira-ELO 2359) is playing 1st board for the luso squad.  Jorge is going to be a great player in the very near future, so remember his name! I have rarely met anyone so passionate about the game…

Round 3. Grigoryan (Armenia) vs Jorge Ferreira (right); Jorge played a great game and was winning at several moments (diagram below).  Luck would have it that he lost his advantage and even fell on time in a position that was drawn!

The Portuguese Chess Federation–which receives a healthy subsidy each year from the government– paid the way for the under-16 squad, while the Canadian squad was lucky to have fundraiser Gary Gladstone (father of one of the Canadian players, Simon, 4th board) do all the necessary arm-twisting to find the money to send the team.

Gary also gives a round by round summary on the Canadian message boards.

Canada was ranked 15th before the start. After 5 rounds, Canada is ranked 12th, having lost rounds 4 and 5 to India (0.5-3.5) and Portugal (1-3) respectively.  Nikita has 3pts, Konstantin has 2pts, Mike has 3 and Simon has 3. Tomorrow Canada will play against Uzbekistan on board 5.

Portugal was ranked 8th before the start.  After 5 rounds, Portugal is ranked 5th.  Portugal has won 4 of its matches so far, losing only 1.  Jorge has 3pts  so far, Pedro has 3.5, Francisco has 2.5 and Vladimir has 3.5  Tomorrow Portugal plays against Russia on the 2nd board. 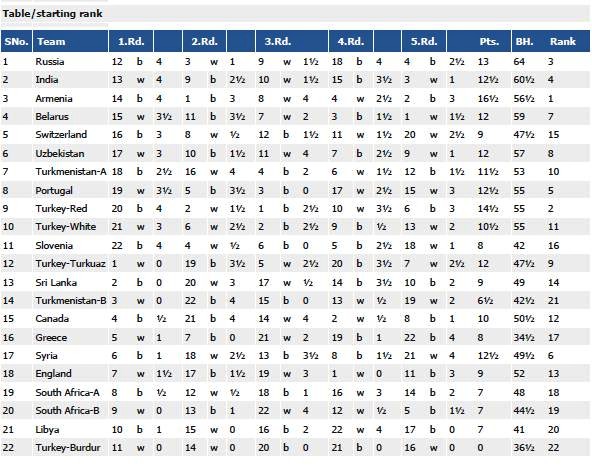 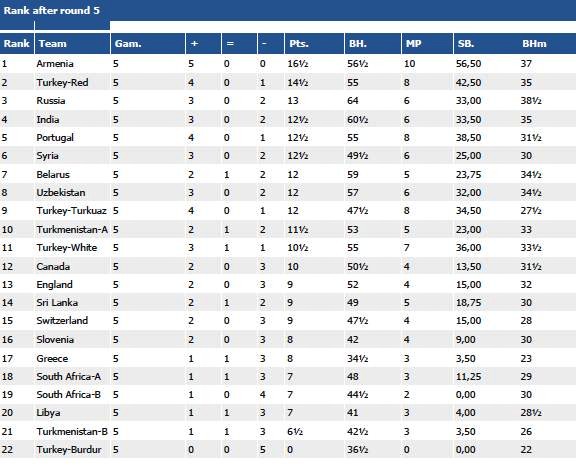 I am not sure how the CFC chose the Canadian team, but for the Portuguese Federation this was done by a national selector. (Portugal–unlike Canada in recent years–follows its own qualification procedures to the letter)  Portugal is very lucky at this moment in time because there are about a dozen talented youngsters under the age of 18 who are grandmaster material.  In this event Jorge Ferreira has an ELO close to 2400, but I would not be surprised if he reaches 2600-plus by age 18.

I am not sure how to explain why Portugal today has such a promising generation–the Portuguese Chess Federation is surely NOT responsible for this (!)–but I find myself quite busy because of it, training no less than 3 of its best talents.  In Turkey the Portuguese team is distinctly superior to the Canadian squad, and it is  therefore no surprise to me that they won 3-1 in their individual encounter, though all of the games were hard fought.
___________________________________________________
HERE ARE THE GAMES FROM THE CANADA vs PORTUGAL ENCOUNTER