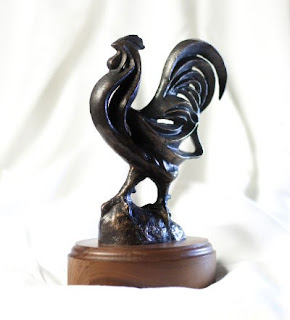 Trevor the farmer was in the fertilised egg business. He had several hundred young layers (hens), called ‘pullets’ and eight or ten roosters, whose job it was to fertilise the eggs. The farmer kept records and any rooster that didn’t perform went into the soup pot and was replaced.
That took an awful lot of his time so he bought a set of tiny bells and attached them to his roosters. Each bell had a different tone so Trevor could tell from a distance, which rooster was performing. Now he could sit on the porch and fill out an efficiency report simply by listening to the bells.
The farmer’s favourite rooster was old Jacob, and a very fine specimen he was too. But on this particular morning Trevor noticed old Jacob’s bell hadn’t rung at all! Trevor went to investigate. The other roosters were chasing pullets, bells-a-ringing. The pullets, hearing the roosters coming, would run for cover.
But to farmer Trevor’s amazement, Jacob had his bell in his beak, so it couldn’t ring. He’d sneak up on a pullet, do his job and walk on to the next one.
Trevor was so proud of Jacob, he entered him in the Polokwane Country Fair and Jacob became an overnight sensation among the judges. The result was the judges not only awarded Jacob the No Bell Piece Prize but they also awarded him the Pullet Surprise as well.
Clearly Jacob was a Pulletician in the making: Who else but a Pulletician could figure out how to win two of the most highly coveted awards on our planet by being the best at sneaking up on the populace and screwing them when they weren’t paying attention.
Do you perhaps know of a Pulletician called Jacob?
(Thx, Ole!)
__________________________________________________________________

The British government has scrapped the Harrier fleet and on their farewell formation flypast over the houses of Parliament they gave the government amessage. (Hint: Squinting a little helps.) 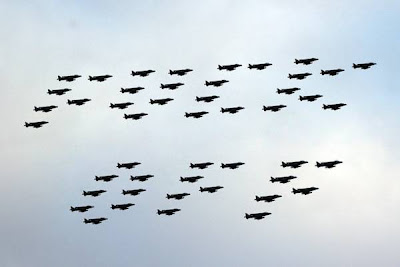