Tuesday potpourri and other nonsense!

Many of the more interesting chess events had a rest day yesterday.  The finals of the Womens World Cup in Khanty-Mansiysk begins today.  (My money is on the Bulgarian Stefanova!)  As well, the Grand Prix in Tashkent will see its 5th round played. (Though Morozevich is in the lead, Caruana is looking good with his back to back wins in rounds 3 and 4!) The Kostic Memorial plays its 7th round today, with Cvitan surprisingly in the lead after 6 rounds.

And  don’t forget that the London Chess Classic is also slated to start sometime this week…Saturday infact, and will continue until the 10th of December.

Caption from George Mason collection: In this game Stalin’s main opponent would be Harry Truman, the board Germany, and the opening gambit would occur in Berlin. Image by Leslie Illington. Source: National Library I of Wales.
Stalin’s pieces include “Eastern Bloc,” and “Berlin Blockade.”  Trumans pieces include a knight,  “Air Lift,” and a piece looking a lot like Gen. Dwight Eisenhower,   “Atlantic Alliance.”
Link  Chess Games of the Rich and Famous
—————————————————————————–

From yesterday’s round at the Bora Kostic Memorial.  Black had just played 26…Qd6, a blunder in a difficult position.  Nikolic played a very nice game from beginning to end.
HOW DOES WHITE REFUTE THIS? 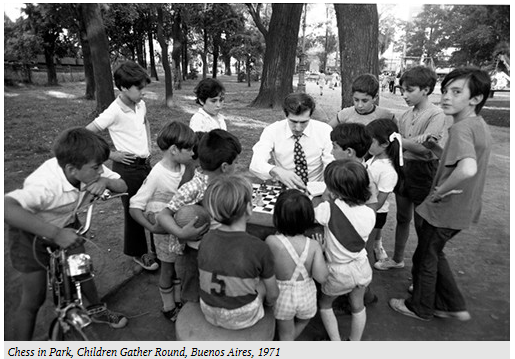 I found this photo of Bobby Fischer at the World Hall of Fame  LINK Fischer actually liked kids and in his famous book 60 Memorable Games he sometimes refers to watching kids playing chess and their comments.  Bobby used to look for ideas from the most unlikely sources…genius looking for inspiration, I suppose!
—————————————————————-
FROM KILKENNY
Traditionally a very strong weekend swiss and this year’s edtion of the event lived up to its reputation.  Some really interesting chess was played!  Hebden and Jones emerged as the eventual victors, but the path to the top was not easy…

im  COLLINS, SAM
From the Kilkenny Open this past weekend, one of the deciding games.   My good friend Sam Collins has quite a reasonable  game here, though it is very hard for both sides to navigate and my readers would do well to think a bit about this position. The position contains a lot of hidden tactical themes, and is quite wild as  Black’s last move  (26…Rg5)  sets up some tricks against g2.
Tempting now  is to play the immediate 27.b5, as 27…Bxg2 is only a draw after 28.Bxg2  f3  29.Nd5! , though the reader should convince himself of this as it is very complicated.  The problem, however, with 27.b5 is that Black has the intermediate 27…Bg7!  and after 28.Bd3 Bxg2! gives a small advantage to Black (the Knight on c3 is hanging).
The best move is the risky-looking 27.h4! when 27…Rg4 actually gives White the edge after 28.b5!   Apparently Black has a draw with correct play:  27…Bg7!  28.Qc4 Rh5!  29.b5  Qe7! 30.Pxc6 Qxh4  31.f3 and there is a perpetual check for Black, but nothing more than that.
BUT who can see all of this over the board when one has limited time?  Besides, Sam wanted to win this game!
SAM PLAYED THE INTUITIVE 27.Qc4 :

Now Black has an absolutely fabulous trick!
BLACK TO PLAY AND WIN!