“Life is a tragedy for those who feel, but a comedy to those who think.” Horace Walpole (1717–1797)
We say  that LIFE can be funny, but what we really mean is that sometimes we need a sense of humour in the face of so much tragedy…
WITNESS the case last week of Augusto Naia, a 52 year old fisherman from Ovar, who narrowly escaped with his life when the boat he was in sunk off the coast of Portugal . LINK

Two of his colleagues drowned in the boating incident last Wednesday…BUT while attending the funeral Saturday of one of these victims,  Naia suddenly became ill and died within minutes.  A family spokesperson said that Naio could not bear the pain of having lost his best friend…

This reminds me of the curious story of  Johanna Ganthaler, from Italy, who was on vacation in Brazil in 2009 with her husband when they arrived late at the airport in Rio de Janeiro and therefore missed their flight back home: the doomed Air France 447 which crashed hours later in the Atlantic Ocean, killing everyone on board.

Congrats to Canadian IM Aman Hambleton for winning the Sunningdale Open held over the long  weekend (24 to 27 May)!  The seven round Open tournament was held in two sections, with the top section fielding 3 GMs and 3 IMs.  Time control was the standard 90/game plus 30 seconds per move.  One game Friday evening; two rounds for the rest. Congratulations also to the organizers for being able to put all of the games in pgn just hours after the tournament finished!  That is being PROFESSIONAL!

The Canadian youngster defeated two tough GMs (Williams and Hebden) and drew with  GM Arkell,  winning first prize of 450 pounds.  Aman also won 21 rating points, more than making up his below-par performance in Bolívia at the Continental earlier this month.
As mentioned in an earlier blog entry, Hambleton and Eric Hansen both intend to spend a year in Europe, playing in the tough European tournament circuit and training.  Both intend to qualify for next year’s National Team that will play in Norway.
Below is Aman’s game against the GM Simon Williams, author and expert on the Dutch Defence.  Aman punished some overly ambitious play by the Englishman.  I especially like the finale!
gm  WILLIAMS, S 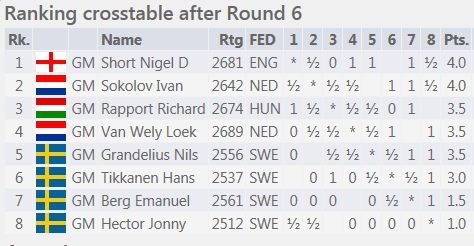 This year’s   edition of the traditional Sigeman &Co   is a very strong tournament with just one round remaining. Both Short and Sokolov have 4 points, just one half point ahead of 3 others.  Should be an exciting finish as Short plays  Tikkanen while Sokolov plays Grandelius.  Pity it is only an 8-round event!
Time control is a very relaxed 100 minutes for 40 moves; 50 minutes for the next 20; then 15 minutes to finsh; plus 30 seconds per move starting from move one.

The 5th round encounter between Short and Van Wely was an exciting affair that saw the English star sacrífice a piece in a sharp Sicilian.
POSITION AFTER WHITE’S 18th MOVE (18.0-0-0)
gm  VAN WELY

gm  SHORT
The reader might do well to pay special attention to the unusual variation in the opening.  In my opinion  Black was overly optimistic when he played the centre break d5, but in any case the resulting position is complicated and  difficult to play for both sides.  But  now Short has succeeded to open the h-file and  has dangerous attacking chances
PERHAPS Van Wely should now play 18…Nf5, supporting the pawn on d4.  However, he decided to sacrífice his Queen for Rook and Knight, an arguable decision that creates a real mess on the board:
18…Pxc3?!

With the help of hindsight, we find that this sacrífice is not really correct.  Apparently Short can now take the Queen and still remain with a very strong attack:  19.RxQ!  Pxb2+  20.Kb1  RaxR  21.Bc5! with Nf4-d5 coming up quickly.

HOWEVER, one’s emotions in over the board play can often cloud our objectivity and sometimes we find ourselves convinced by our opponent’s optimism, resulting in us playing a second best line.  HERE Nigel decided to decline the Black Queen sacrífice and to instead make a real sacrífice of his Knight by simply re-capturing the pawn on c3:
19. Nxc3!?  Qc8!  20.Qh7+  Kf8  21.Ne4!

NO!  NOT THESE CHESS LEGS, DUMMY!

TOCADA MOVIDA  is an argentine music group that specializes in spanish songs with a chess-theme.  Translated roughly ”Touch Move”, the group is very popular and works with the Buenos Aires government for promoting chess in schools, among other things.

One of their hits is PEON AISLADO, translated as ”Isolated Pawn”
[youtube http://www.youtube.com/watch?v=YnMTpM2FWe4] 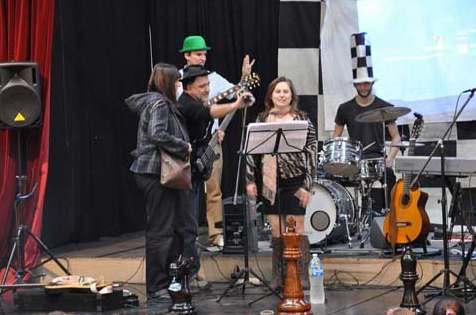 They have even convinced Judit Polgar to sing for them when she was recently in Argentina! VISIT THEIR FACEBOOK PAGE!
Share