Following the controversial decision by the Discipline Commission of the FFE to punish/sanction the 3 French stars involved in the  cheating scandal that allegedly took place during the Chess Olympiad late last year, it now appears that the players have decided to appeal.

This has allowed 19-year old GM Sebastian  Feller to continue to participate in tournaments pending a decision on his appeal.  I have taken a look at Feller’s games in the European Championship in France (taking place right now) and they are very impressive! Feller has 5.5 points in 7 games (4 wins and 3 draws) against very strong opposition.  I was tempted to see if my chess engines would agree with his moves (!), but this would prove nothing!  Feller is a very strong GM who does not need help inorder to play great chess.
However, this does not mean that Feller did not give in to temptation and was somehow convinced to partake in a group effort to use computers during the game.  I refer my readers to my blog entries from last week on this very topic for more information.  We will all have to wait to see how the appeal turns out, and then possibly we will see a legal process in French courts challenging the FFE decision.  In essence, it may very well turn out to be a very long wait… 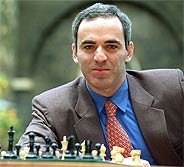 Former World Champion Garry Kasparov is in Aix les Bains  to attend the ECU extraordinary meeting this week and he gave a short interview (below) where he commented on the alleged cheating incident.  Kasparov admitted that while he had not studied in great detail the whole process, it very much appears to him that something did infact take place (cheating).  Kasparov went on and applauded the courage of the FFE to bring the disciplinary action forward against the players in question, if for no other reason than it is necessary to clean the image of chess.  Kasparov also made some interesting comments about doping in chess, FIDE policies in this regard, and the future of classical chess in his opinion.
[youtube http://www.youtube.com/watch?v=-PQyDN19moY] ______________________________________________________
THE HYPNOTIST ?

Mikhail Tal ( 1936-1992 ) earned the nickname ‘The Magician from Riga’ because of the almost super-human feats that he achieved in over the board play.  Especially his sacrifical attacks made him a big favourite amongst chess fans all over the world, and played a very big role in his scaling the Mount Olympus of chess and winning the World Title in 1960 at age 23.
Many have argued (and continue to argue) that Tal’s successes had more to do with his ability to impose his reckless style of play on his opponents than on chess strength.  Many players tried to avoid getting into the messy and complex positions that Tal wanted, but were simply unable to do so.  This has led to the theory that Tal used some sort of hypnotism during his games to disorient and dominate his opponent’s thinking….

Benko using sun-glasses during a game with Tal. They did no good as he lost anyway!
Infact, GM Pal Benko was so worried about avoiding eye contact with Tal during a qualifying tournament in 1959 that he appeared at the board wearing sun-glasses!  Tal had heard before hand that this might happen, and so he also wore sun-glasses for the first few moves.  Tal later joked that he won the game because he knew at what moment to take the sun-glasses off!

Viktor Korchnoi believes that Tal used hypnotism during his games
Today on the Europe-Echecs website there is an interesting video interview with Korchnoi–in English–where he actually discusses Tal and hypnotism.

Korchnoi believed that for some reason he was naturally protected from Tal’s hypnotism, as was Spassky.  He believes that Tal’s biggest successes were due to his ability to steer the play into the kinds of positons where not only was Tal like a fish in water but also where his opponents were uncomfortable.  And that Tal did this thru deliberate hypnotic means.
[youtube http://www.youtube.com/watch?v=FMIOfJa9AoU]
_____________________________________________________________
I played Tal on several occasions in the mid to late 1980’s.  Most of our games were friendly draws, but the game we played in the last round of the Montpellier Candidates Tournament (1985) was a real game.  Hard fought and tense all the way.
Tal needed a draw inorder to secure a playoff match against Timman, and I wanted to try to improve my tournament score (I would be in last place regardless. I started the tournament badly, but half way thru I regained my form: I defeated Spassky in a great game. I crushed Timman in 30 moves with Black. I had a forced mate in 5 against Vaganian (but missed it and lost in time trouble!) I was fighting for my dignity! )
POSITION AFTER 21 MOVES:
GM  SPRAGGETT

GM  TAL
The position is very complex and unclear.  White should now proceed 22.Nxf5  QxN  23.Qxh5 but after 23…a5! it is still anybody’s game as White’s King is just as exposed as my own King.
Now a curious thing happened.  Tal –who always wrote down his move before he played it–wrote down a very weak move 22.Qf3 and did not try to hide it from my view.  At first I thought that Tal was joking with me, as 22.Qf3 simply loses a piece to the tactic 22…Be6 and then if he takes my Rook on a8 I can skewer his Rook on h1 with 23…Bd5!, remaining a piece up.
But as Tal began to think some time, and the minutes passed, I was at a loss to make sense of his behaviour.  Finally, after 5 minutes, Tal actually played the blunder 22.Qf3?  !!  I could not believe my eyes, because the tactic is so elementary…so the game continued
22…Be6!  23.QxR  Bd5