Toronto Mayor making an ass of himself (again!)

By Cory Doctorow
October 27
Toronto mayor confronted by comedy interviewer calls 911, reportedly shouts “You bitches! Don’t you fucking know? I’m Rob fucking Ford, the mayor of this city!”
Rob Ford is Toronto’s buffonish embarrassment of a mayor, elected by the suburbs to “end Toronto’s war on cars” and “open the city for business,” he declared that he would save money by “ending the gravy train” of city spending, only to take office and discover that the only discretionary funding that remained to be cut was to things like well-loved, well-used libraries. 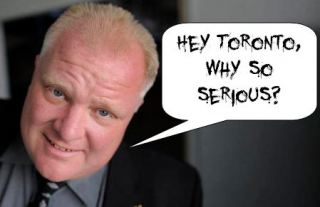 Marg “Princess Warrior” Delahunty is a character played by Mary Walsh on the comedy-news-showThis Hour has 22 minutes. It’s complicated, but basically she dresses up like a middle-aged housewife, who is, in turn, dressed as a warrior princess, who is, in turn, a political journalist. It actually works really well and has resulted in some of the best political reporting in Canadian history.

Princess Warrior
But when Marg Princess Warrior tried to interview Rob Ford, Ford reportedly went crazy, called 911, demanded faster service, and said, “You bitches! Don’t you fucking know? I’m Rob fucking Ford, the mayor of this city!”
To be clear, the emergency that prompted this outburst was that Mayor Ford was in danger of being interviewed by a comedian.
This isn’t the first outburst of this type to emanate from His Worship. A few years back, Ford got into an altercation with fellow fans at a Leafs/Sens game after they asked him to dial down his obnoxiousness. He responded with “Who the fuck do you think you are? Are some kind of right wing Commie bastard [sic]? Do you want your little wife to go over to Iran and get raped and shot?”…
_________________________________________________