A stunning sacrificial attack against the current world title holder, Anand,  led to a decisive 30-move victory in the opening game of the world championshp being held in Sofia, Bulgaria.  When the Indian resigned the packed audience exploded in thunderous applause for the home town hero, Topalov.
The second game is tomorrow, with Anand playing White.  Can he bounce back and level the score?

POSITION AFTER BLACK’S 23rd MOVE.  TOPALOV TO PLAY AND WIN!

Topalov played the brilliant and surprising 24.Nxf6!!  Anand could only resist 6 more moves… 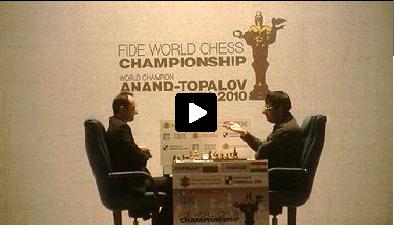 The screen shot in the playing hall of Anand extending his hand congratulating his opponent on a brilliant victory.

At the joint post-game press conference Anand was asked if he felt that his tiring 40 hour trip earlier in the week to reach Sofia by road had influenced the result today.  The Indian refused to make excuses and simply replied that he had not played up to his usual high level of play and that tomorrow is another day. 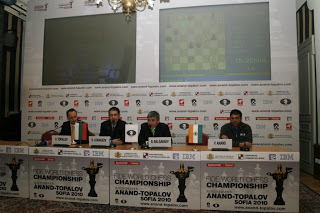 While certainly a painful defeat for Anand, I am of the opinion that this is probably the best way for the Indian to have begun his title defence!
In recent times Anand’s form has dropped off noticeably, and his results have not at all been of the level that one would expect from a world champion.  In an earlier blog I speculated that Anand had developed a fear of losing, perhaps the worse thing that can happen to a champion.
Fear of losing in chess can translate into a loss of confidence, a loss of ambition and result in too many draws.  Often in the game of chess it is necessary to push forward and attack, without fear of the consequences.  Lasker wrote that when the position dictates, it is the moral obligation of the master to attack with energy and vigor…and that failure to do so can even backfire!  Fear of losing can destroy a chess player’s talent and skill if not treated.
Now that Anand has lost the first game, the worse has already happened to him.  Especially because the Bulgarian made it look so easy and pretty!  It was a humbling experience…Anand can now sit down and play the rest of the match with the knowledge that he has nothing to lose and everything to gain from now on. Now Anand is free to concentrate on the game.
Is winning the first game of a world championship match such a big advantage?  I think not.  History is filled with examples where the person who won the first game actually lost the match!  For instance, in the 1937 Euwe vs Alekhine match, Euwe crushed Alekhine in the first game, but lost the match decisively.

And who can forget the Spassky vs Fischer match of 1972, when Fischer lost the first 2 games (!) but went on and won a decisive victory against the Russian?

On the otherhand, it was a great day for the Bulgarian.  Imagine winning the most important game of your life in front of your home town!  With the whole world watching!  But now the Bulgarian will be foolish if he thinks that the match is over…a 12-game match is a lot of chess games, and plenty of time for the opponent to catch up.

I am confident, however, that Topalov has the maturity and the experience (and the team!) to not read too much in today’s victory.  He has been the recipient of a very nice present, nothing more!  Today’s battle saw Topalov emerge victorious, but the war has yet to be won…

The first game of the world title match saw a sell-out crowd of 250 for the first game, being played in the lavish Military Club in the centre of the Bulgarian capital.

Security for players and spectators was intense, with metal detectors at the entrance of the hall to find and confiscate mobile phones and an opaque curtain between the players and the audience to prevent any signalling from the crowd. 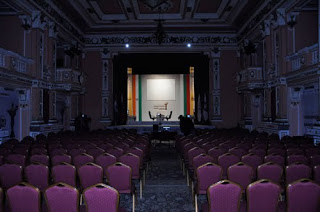 The time control for each game shall be: 120 minutes for the first 40 moves, 60 minutes for the next 20 moves and then 15 minutes for the rest of the game with an increment of 30 seconds per move starting after move 61. The Chief Arbiter is Panaqiotis Nikolopoulos (Greece). The Deputy Chief Arbiter is Werner Stubenvoll (Austria). The total prize fund is 3 million Euros: 2 million for the players, 400,000 for FIDE taxes and 600,000 for organizational costs. The winner will receive 1,2 million Euros while the loser receives 800.000 Euros.

Here we see both players deep in thought 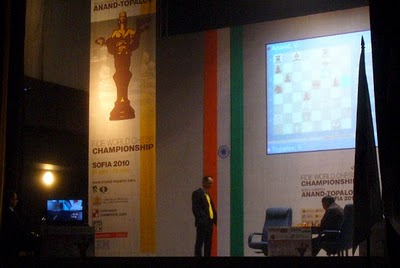 ”Can the Indian save himself?” 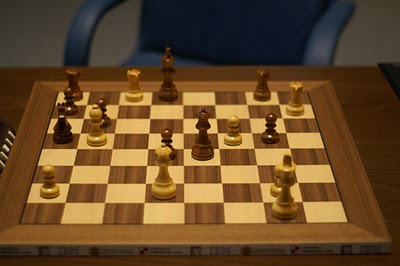 The final position at the actual board