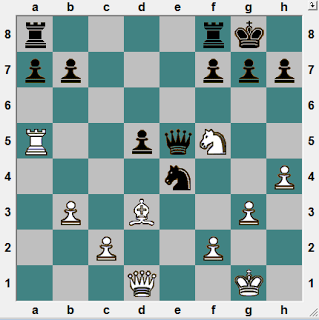 From the 2012 Chinese Team Championship. It has been a very chaotic and confusing struggle so far (not to say imperfect) and Black finds himself an exchange up and a seemingly dominating game with his Queen and Knight  well lodged in the centre.  Should White now play 23.Qg4 then can cleverly repulses the attack and wins with 23…g6!  24.Rxd5 (what else?) 24…Qa1-ch  25.Kg2  Qh1-ch!!
HOWEVER, things are not always what they seem to be, and sometimes we can be very surprised by what treasure is hidden in the position.
HOW DOES WHITE TURN THE TABLES IN HIS FAVOUR? 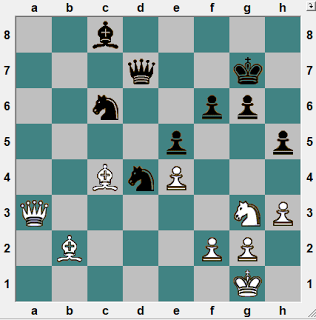 Antoniewski
From a qualifier for the  2012 Polish Team Championship.  A hard fought game up to now, but unfortunately for Black he failed to notice the clever trap that White had set for him!
WHITE TO PLAY AND WIN!
Share