Below is the position from the Topalov vs Lutz game  (Dortmund, 2002) after Black’s 26th move.  Black is a pawn down but has considerable attacking potential over on the Queenside, should he get the time to proceed.  The problem is that it is Topalov’s move and he has a nasty tactic that puts Black totally on the defensive: ultimately, unable to save the game.  Do you see it?  Put on your intuition caps and get down to work! 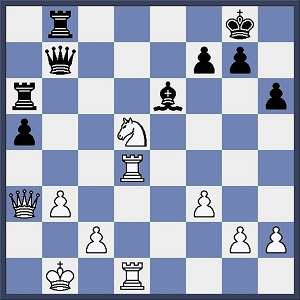 TOPALOV
WHITE TO PLAY AND WIN!