“People think I’m crazy to put myself through such torture, though I would argue otherwise. Somewhere along the line we seem to have confused comfort with happiness. Dostoyevsky had it right: ‘Suffering is the sole origin of consciousness.’ Never are my senses more engaged than when the pain sets in. There is a magic in misery. Just ask any runner.”

FROM THE CHINESE TEAM CHAMPIONSHIP 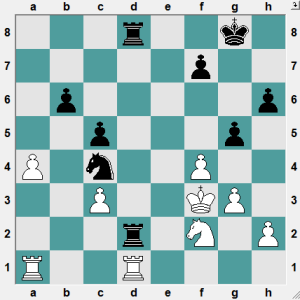 TCh-CHN  2015.8.22  Position after White’s 37th move (37.b7). A wild position!  Making things worse, both players were probably short of time. Earlier Black knew that he was better, but even so, it is extremely difficult to play correctly when we have these mad pawn races…It makes no sense for Black to play 37…Rb8 and White will simply advance his a-pawn. But what to do?

White is hoping for 39…f1=Q 40.KxR! when only he has winning chances because his King can hide from Black’s checks.

White can not avoid perpetual check after 40.Kf3 Nxh2+!

In the game, HOWEVER, Black wanted more…

The move that Black must have overlooked!  Now White is winning!

If Black could keep his advanced centre-pawns then he would have chances to hold, but unfortunately for him he is going to lose one of them.  The game continued

TCh-CHN  2015.8.21  Position after White’s 32nd move (32.Bc4) Another wild, chaotic and out-of-control position from wonderboy Wei Yi!  Despite his heroic efforts, Black here is simply lost: White’s King is safe enough and nothing can stop White’s advance of pawns on the Queenside. Wei, never the less, tries to conjure up some threats…

Black tries to regroup and put his Bishop on f4.  Now good enough for White is the defensive 33.g3!?, but there is no immediate need for this and so White advances his b-pawn…

HOWEVER, White thought he saw something better…

White had based this decision on some long variation…

White is an entire Rook up and he must have thought that the rest should be easy…REALITY is that White is LOST!!  Amazing…

Threatening mate starting with 38…Qxh3+. The next moves by White are all virtually forced 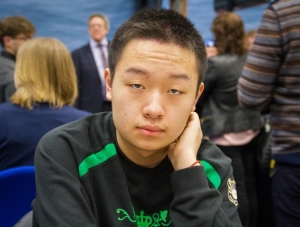 Sixteen year old Wei Yi is the HOTTEST property in the chess universe at this moment, very much seems to be a reincarnation of Bobby Fischer. Wei wins virtually everything he plays in and the FIDE elo system can barely keep up with his leaps and bounds.  It is conceivable, in this writer’s opinion, that Wei Yi is ALREADY the strongest player in the world(!) but because he is so young and has only recently EXPLODED onto the world chess schene, there has not been enough time for him to prove it! (Or for the rest of the world to realize it)