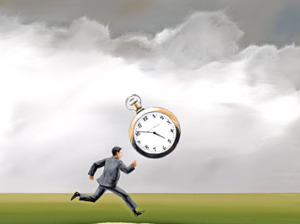 “He was always in a hurry to get where he was not.”

Kitchener International.  31-7-2015.  Position after 44 moves. Ofcourse, Black’s positional advantage outweighs the two extra pawns that White has.  Black is going to get a passed h-pawn in the next move or two…probably White is going to lose the game in the long run. BUT…even bad positions can help us to become better players. The trick is to turn a negative into a positive: such positions can bring out the best in us if we have modest objectives. White can try to see how long he can resist…

Here White should try to reorganize with 45.Rc4, 46.d4 followed by (if possible) 47.Qd3 and Qe4, controlling the h1-square (the queening square!) And then, depending on how Black proceeds, advance on the Queenside where White has an extra pawn. Black would have to play very well if he is to bring in the point.

HOWEVER, as often happens in such position, the defence fails because he gives up hope…

Kitchener International.  1-8-2015  Position after 33 moves. A really nice game by Panjwani: finally, the slippery Sambuev did not get away!  Here White is all over Black, but can you see a way to put Black out of his misery in just one move?