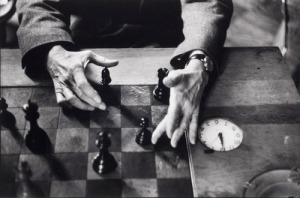 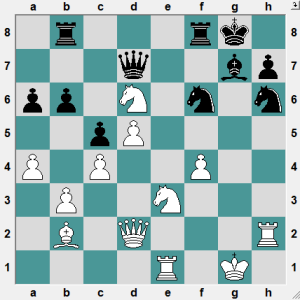 Gibraltar Masters 2015.1.27  Round 1. Position after 28 moves. The Bulgarian superstar gave a beautiful  strategic exhibition against Sanchez’ Kings Indian, finishing with an elegant and precisely played combination.

ch-IRAN Mashhad 2015.1.21  Position after White’s 34th move (34.Be2).  White has not played well up to now, and has been stubbornly angling for some trick on f5, but Black has not fallen for it. Black should prudently play 34…Qd7 , removing the Queen from any possible danger, and if anyone is better, it is Black! However, not fully appreciating White’s idea behind his last move, he played…

Oops!!  Black needs his g-pawn to stop any Nf5+ winning the Queen.  Ofcourse, 35…Bf7 is met by 36.Nhf5+  In anycase, probably flustered, the game soon ends

And Black threw in the towel in a couple of moves…