“Crying is all right in its way while it lasts. But you have to stop sooner or later, and then you still have to decide what to do.”

77th Tata Steel GpB 2015.1.18  Position after 31 moves.  The 15-year old Chinese sensation is unstoppable!  His opponent has his back against the wall and now all that is required is a little precision to bring in the point. 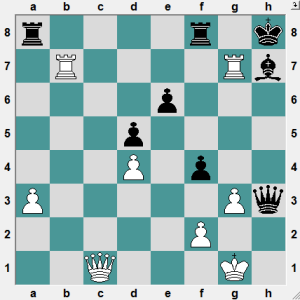 77th Tata Steel GpB 2015.1.18  Position after 34 moves of play.  A sharp finish! Black is mentally embraced for 35.RxB+ QxR 36.RxQ+ KxR, when–although worse–Black has reasonable chances to hold if he plays well. But take a close look at the position above: with Rooks doubled on the 7th rank, White MUST have better… 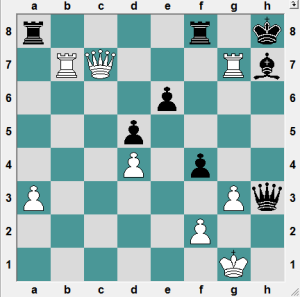 Ouch!!  This move wakes Black up to the cold reality: he is busted! Mate is quickly approaching… 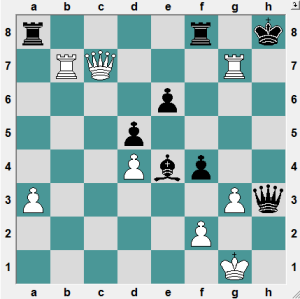 There is nothing better…Sometimes the best defense is offense!

WHITE TO PLAY AND MATE IN 3 MOVES!

70th ch-AZE Baku AZE  2015.1.14  Position after 21 moves. Material may be even, but Black’s pieces are sleeping on the Queen-side while his King is all alone in his castle….NEVER a good omen!

Armenia-Ch  2015-01-13  Position after 16 moves.  At first sight nothing much seems to be happening here, but this is just the calm before the storm.  A deeper look into the position reveals the same problems as in the last example: Black’s pieces are sleeping on the Queenside.

Attacking the Rook on e8 while bringing in the powerful Queen.

This powerful blow is the key to White’s combination!  The King Bishop comes into play, threatening, amongst other things, 20.Be4.  Curiously, Black is helpless!

There is nothing better.

As the reader can easily verify for himself…