Catalan Championship (sub-18)  La Pined  2016.3.20  Tarrago,R—Orteu,M. Position after White’s  21st move (21.Nxc7).  Clearly White must have something better than this pawn grub, but now Black has the opportunity to end the game quicky in his favour. Do you see the idea? 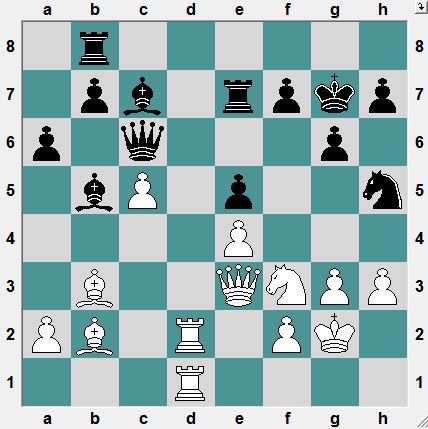 Azores Open  Ponta Delgado  2016.4.1  gm Spraggett, K– im Hernandez Estevez,Yud. One from my own games! Position after 29 moves. Despite material equality, Black is suffering because of his poorly placed pieces. White’s pieces, on the otherhand, are all harmoniously placed.  Sometimes this difference is enough to win the game!

Azores Open  Ponta Delgado  2016.3.31  gm Spraggett,K— im Rocha, S.  Position after 27 moves. Another from my own praxis. Even though White is a pawn up, Black is hoping that his active pieces will provide sufficient counterplay.  Black is threatening annoying little things such as Qb1+, Ng5 or Nef4.  Infact, in such dynamic situations an extra pawn is usually irrelevant… Unfortunately for Black, it is White’s move!