“Thinking before taking actions is useful only if you are going to take action, otherwise you are wasting time and insulting your mind.”

The Importance of Objectivity

A tricky position, especially for Black. The White Knight is clearly more active than the Bishop, and,  along with the White Queen, poses a constant threat over the Black kingside.  However, for the moment, atleast, the Black kingside has no weaknesses. For this reason, Black should seek counterplay. The active 25…Qa5 (with ideas such as Qa1+ or Qe1+) seems like the move that Black should investigate. 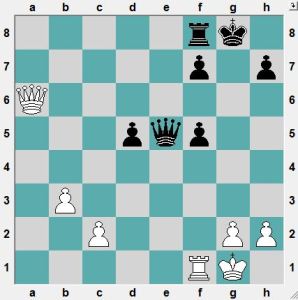 Probably White has nothing better than to try to improve his position with 32.h3 (32…Kg7!?), with a tough game for both sides.  My view is that Black should hold the game without too much difficulty, given the fact that there are no minor pieces on the board and it is very difficult for White to get his Rook into play.

OFCOURSE, there is no doubt that the chances belong to White, but–given the state of affairs in our first diagram above–Black must be objective: he has to accept the unpleasant and suffer a bit to make a draw.

INSTEAD, Black could not make this decision, prefering to ‘complicate’ the game:

Bundesliga Solingen 2015.12.13  This past weekend.  From the game gm Parligras,M–gm Hracek,Z., position before Black’s 20th move. Black clearly stands better, virtually all of his pieces more actively posted than his adversary’s.

Attacking the Rook as well as the pawn on e2

All of White’s options are unsatisfactory

White is attacking two pieces.  Did Black overlook something?

It looks like the worse has passed for White…