”Each of us is great insofar as we perceive and act on the infinite possibilities which lie undiscovered and unrecognized about us.”
James Harvey Robinson

(FROM THE GAMES OF GM OSSIP BERNSTEIN)
Solutions can be found at: http://www.wtharvey.com/bern.html

Bernstein vs Adolf Staehelin, Bern, 1932
WHITE TO PLAY AND WIN

Bernstein vs Oskar Naegeli, Bern, 1932
WHITE TO PLAY AND MATE IN 5 MOVES

Bernstein vs Gideon Stahlberg, Zurich, 1934
WHITE TO PLAY AND WIN

Hans Muller vs Bernstein, Zurich, 1934
BLACK TO PLAY AND WIN
8

Stone vs Bernstein, London, 1946
BLACK TO PLAY AND WIN

Bernstein vs Flavio Carvalho, Montevideo, 1954
WHITE TO PLAY AND WIN
10

Ossip Bernstein was one of those players who lived and thrived in troubled times. A successful financial lawyer, grandmaster calibre chess player, world traveller and a very cultured individual, his career(s) crossed with the Russian revolution, two world wars, the great depression and meeting every great chess champion of his time. In his tumultuous life he lost his fortune not less than 3 times!
From Bob Wall: http://www.geocities.com/SiliconValley/Lab/7378/ossip.htm
–Ossip Samilovitch Bernsein was born on September 20, 1882, in Gitomir (Zhitomir), a small town in the Ukraine. Ossip Bernstein came from a rich family of Jewish heritage.
–He took up chess in 1901 at the age of 19, while studying law in Germany. In matches, he defeated Carl Carls and Szymon Winawer.
–He almost earned the Master title in his first tournament. He finished 2nd in the Hauptturnier A section of the 13th German Chess Federation at Hanover in 1902, behind Walter John.
–In 1902, he earned his Master title from his second tournament. He won the first tournament of the General Chess Federation of Berlin in 1902.
–In 1902-03, he took 1st place at the Jubilee Tournament of the Berlin Chess Association.
–In 1903, he came second after Chigorin in the 3rd All-Russia championship at Kiev.
–In 1903-04, he tied for 2nd-3rd with Spielmann in the Berlin City Championship, behind Caro.
–He was a prize winner at Coburg in 1904. He tied for 4th-5th.
–He was a prize winner at Barmen in 1905. He tied for 4th-5th.
–He took 4th-6th at Ostend, Belgium in 1906. Schlechter won the event.
–He tied for 1st with Schlechter in the International Masters Tournament of Stockholm in 1906.
–In 1906, he obtained a doctorate in law at Heidelberg, Germany. He then established a law practice ion Moscow.
–In 1907, he tied for first with Rubinstein at Ostend. 29 masters participated.
–In 1907, he married a lady named Wilma and they had two sons. They were married for 54 years.
–In 1909, he played in the Chigorin Memorial at St. Petersburg and took 5th place. Lasker and Rubinstein tied for 1st. 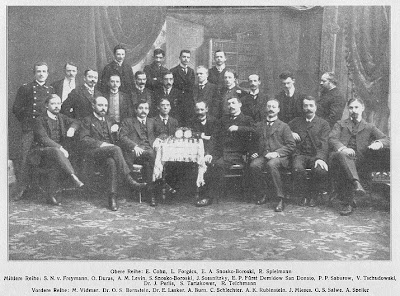 Ossip Bernstein is sitting directly to the left of E.Lasker

–In February-March, 1911, he played in San Sebastian and tied for 8th-9th. Capablanca won the event.

San Sebastian 1911. Ossip Bernstein is the 4th person from the left.
(Note: the San Sebastian 1911 tournament, contrary to popular belief, was not held at the Casino, but was held in a now demolished hotel some 200 meters from the Casino. In those days there was a loud band playing 18 hours a day outside the Casino (which was world class) , and hence it was too noisy to play chess.-kbs)
–In March, 1911, he won the Moscow championship.

–In 1917, he lost his fortune in the Russian revolution. In 1917, he was arrested in Rostov, but released because of his chess reputation. They later moved to Kiev, then to Odessa.

—In 1918, in Odessa, he was arrested and imprisoned in the Cheka (Bolshevik secret police). Bernstein’s crime was his role as legal advisor to bankers. There was no court trial. A minor official had a firing squad line up Bernstein and a number of other prisoners against a wall to be shot. A superior official appeared and asked to see the list of prisoners’ names. Discovering Ossip Bernstein on the list, he asked Bernstein if he was the famous chess master. Bernstein said yes. The official then made Bernstein play him a game of chess to prove it. When Bernstein won, the official release Bernstein.


–In 1919, the British government sent several ships to Odessa to help some of those escape who were in special danger of being killed. The Bernsteins were permitted to board one of the ships. The ship sailed to Serbia where Bernstein left and went to Belgrade. He then went to Vienna and to Oslo, Norway.

—In 1920, he settled in Paris where he became a financial lawyer. One of his first duties was to go to New York to take care of some financial matters for some clients. His chess reputation helped him get a visa right away and he made the trip to New York. Once on New York, the law firm he visited refused to turn over any documents to an unknown like Bernstein. However, a member of the Manhattan Chess Club that was also well known in the banking circles vouched for Bernstein, and he was able to complete his transaction. In 1920, he became a French citizen.


–In 1940, he fled to Spain. When he reached the Pyrenees, he and his family had to walk over mountain roads at night, hiding in caves during the daylight hours to avoid the Germans. After two exhausting nights. he reached Spain. However, Bernstein had a heart attack and was unconscious. The Spanish frontier guards arrested the family and placed them in separate prisons. Through the intervention of some influentual friends in Spain, his family was released and was allowed to stay in Spain.

–After World War II, he returned to Paris in 1945. Their Paris home was completely robbed by the Germans. They did find their son again who had been a prisoner of war in Germany for 5 years.

–In 1946, Ossip’s son was an interpreter for the United Nations. He was able to speak almost every language in Europe.

–In 1948, he drew a game against Fine at a cable match between Paris and New York.

–In 1950, he was awarded the International Grandmaster title.


—When President Eisenhower went to Europe to meet Kruschev, Bernstein’s son was selected to accompany him as interpreter.

–In 1954, he played at Montevideo and won a brilliancy prize for his game against Najdorf. Bernstein took 2nd place, behind Letelier.

–In 1956, he went to Moscow with the intention of playing for France in the Olympiad. But he fell ill before he could play a game.

–In 1961, he played in the IBM tournament in Amsterdam,

–He died in his sleep on November 30, 1962 in a sanatorium in the French Pyrenees.