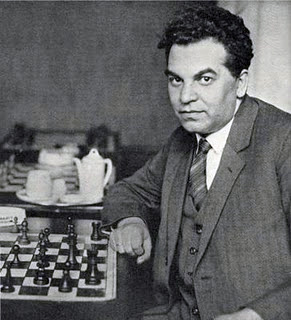 Richard Reti came from a family of artists and musicians.  Even though he died relatively young (in Prague, 1929, at age 40), Reti left the world a legacy that only a handful of grandmasters can better.  In the realm of endgame study compositions his name –even today–is held in high reverence.  Below is a pretty gem that is one of my favourites.  On an open board with only 5 pieces who would think of there being a mating position in only 3 moves?

While Reti was hardly the first player to specialize in the opening beginning with 1.Nf3, his manner of playing it was unique and today we often call this opening the Reti opening. Reti often combined the double-fianchetto with the moves Nf3 and c4, giving the opening its distinct stamp. 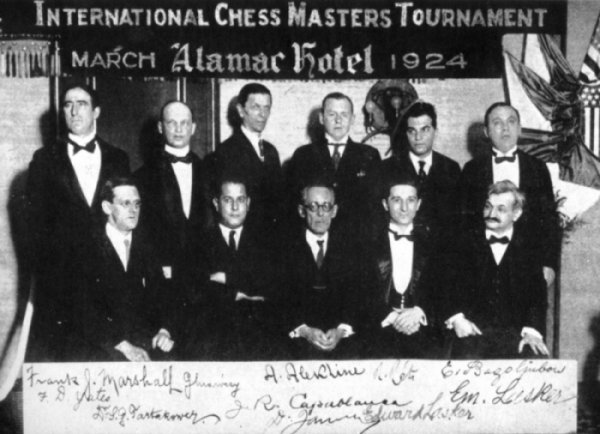 Reti is second to the right, top row.

At the 1924 New York International , Reti finished a respectable 5th place, behind Lasker (the winner !), Capablanca , Alekhine and Marshall.  However, in some ways Reti’s performance stands out in terms of artistic achievement. He inflicted on the world champion- Capablanca- his only loss of the tournament and was also responsible for one of Alekhine’s only 2 defeats.
But the manner in which Reti did so is remarkable for 2 reasons: first, each game was exactly 31 moves long; and second, the first and last moves of each game were identical (!!): 1.Nf3 and 31.Rd5
Witness yourself!

SOLUTION:  It looks as though the White Rook will have to sacrifice itself in order to stop the far advanced Black pawn from Queening.  However, a bit of magic allows White to , instead, give his Bishop for the pawn, leaving an easily won ending (Rook vs King).   1.Rc3!!  b2 (nothing better; otherwise Bc1)  2.Bc1!!  b1(Q)  Ofcourse, taking the Bishop prevents mate, but the ending would then be child’s play to win!   3.Ra3 mate!
Share