PODGAETS
It is characteristic of the isolated queen-pawn game that sudden attacks and explosive changes in the position appear out of the blue.  This game is no exception.  None of the pieces have been exchanged and this is about to change right now…Black’s last move (20…Ne4 was very provocative!)
21.Nxf7!

A typical motive in this type of position.  White draws the Black King into the open.  White’s exceptionally well posted Bishop on a2 suddenly becomes a lethal threat.
21…Kxf7 22.Qg4!

The defender is always faced with a more difficult task than the attacker, in particular because he must deal with both direct (real) threats as well as phantom threats.  No doubt Black saw White’s next move, but he must have overlooked the 25th move.
23.Nxe4!

Ouch!!  Were it not for this move then none of White’s play would make any sense.  Black can not interpose the Bishop because 26.Be6 and 27.Ng5 wins the Queen.  Now Black is forced to move his King to the backrank where it becomes even more vulnerable
25…Ke8 26.Bxe6 Qa4

A curious position.  Black is a Rook up but is helpless against White’s attack.  The Queen and Minor pieces ensemble is one of the most potent attacking forces in the game.  In the meantime, Black must do his best to defend against the immediate threats (30.Bd7ch)
29…Bc6 30.d5 [30.b3! is faster.  Both players were probably in time trouble]
30…Bb5 31.Qf7 Kd8 32.d6! 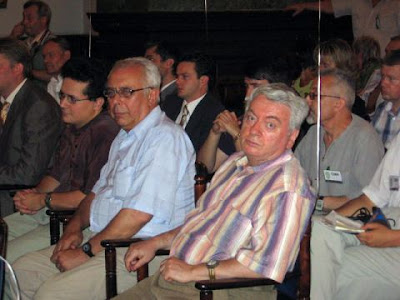 Mikhail Yakovlevich Podgaets was born in 1947 in Odessa in the Ukraine. He became an IM in 1972.  Although he had a very short playing career, he won the championship of the Ukraine in 1976.  He later became Karpov’s trainer, and co-wrote several books on the Caro-Kann with Karpov.  Podgaets died in 2009.