Ken and Mike were fishing in the Eastern Townships when Ken pulled out a cigarette.

Finding he had no matches, he asked Mike for a light.  ‘Yeah, sh-u-r-e, I think I have a lighter,’ he replied, and then reaching into his tackle box, he pulled out a Bic lighter 10 inches long.

‘Jiminy Cricket!’ exclaimed Ken, taking the huge Bic Lighter in his hands. ‘Where did you get that monster??’
‘Well,’ replied Mike, ‘I got it from my Genie.’
‘You have a Genie?’ Ken asked.
‘Yeah, sh-u-r-e. It’s right here in my tackle box,’ says Mike.
‘Could I see him?’
Mike opens his tackle box and sure enough, out pops the Genie.
Addressing the genie, Ken says, ‘Hey there I’m the best friend of your master … will you grant me one wish?’
‘Yes, I will,’ says the Genie.
So Ken asks the Genie for a million bucks. 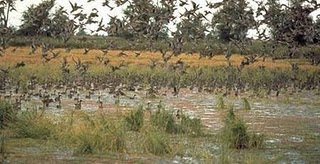 Mike answers, ‘Yeah, I forgot to tell you that the Genie is hard of hearing. Do you really think I asked for a 10-inch Bic?”