The Arab-American identity in a diaspora context.

‘I Say Dust’ tells the story of Hal, an Arab-American poet belonging to the Palestinian diaspora in New York City, who meets Moun, a free-spirited chess sales girl. 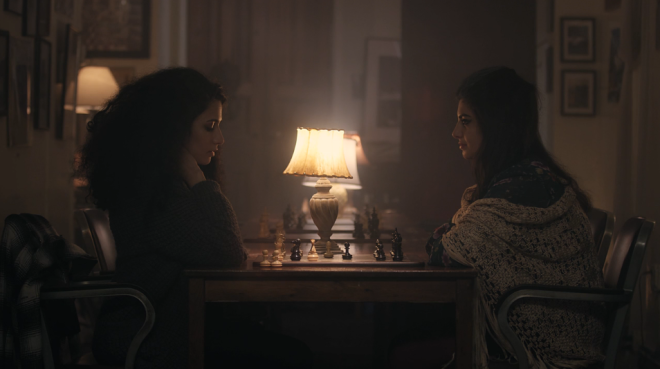 Their brief homosexual love affair forces them to challenge their understanding of what makes home. Starring Hala Alyan and Mounia Akl

Mounia (left) is an award winning Lebanese writer, director and actress working between New York City and Beirut. Hala Alyan (right) is an award-winning Palestinian American poet and clinical psychologist whose work has appeared in numerous journals including The Missouri Review, Prairie Schooner and Colorado Review. She resides in Manhattan.

”Born in Beirut in the midst of civil war. Her family emigrated to the United States of America when she was 11 years old. At that time, Darine discovered her love for writing. She started writing her diaries and poetry at her grandmother’s home in Detroit. The writings revolved around the concept of readapting to a new home and defining family.

Later, Darine moved to Los Angeles to attend the Art Center College of Design in Pasadena, California. She completed her MFA in screenwriting and film directing.

Darine wrote and directed a number of short films that went on to win prestigious awards at International film festivals. Her awards and recognitions include ‘EMMY award Finalist’, ‘Best Short Film at Evolution FF, ‘Audience Award’ at Zero FF, ‘Nominated for a Best Foreign Film’ at International Filmmaker Festival, ‘Honorable Mention’ at the Los Angeles International FF…and many more.” Read more HERE. You can find a fair critique of ‘I say dust’ HERE. Below is an excellent interview with Darine done in 2014, for an earlier film; the first minute is in arab, but the rest is in english: