At the recent European Team Championship Russia (left in photo above) only managed 5th place, out of the medals.  Germany was the surprise gold medal winner, but even so one would have expected the Russian bear to have atleast landed in the medals.
What went wrong? 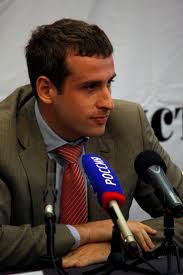 Ilya Levitov, the top man in the Russian Chess Federation (RCF) has not been long in trying to find answers…and where to put the blame.  What is unclear, however, is who it is who will bear the brunt of the blame.  Changes, however, in the personnel of the team have been promised before next year’s Olympiad in Istanbul.
”In order to clearly understand the reasons for the failure of our team we need to carefully analyse what took place…if we don’t rebuild the team and our approach to how it’s formed and the main team members, then I think we’ll continue to be unsuccessful…some members of the team showed a certain lack of professionalism, while others were a little infantile.
I can’t reveal any details as that’s information of an internal character. I think we need to root it out, and in the near future (with that aim in mind) we’ll take very serious measures. I can tell you that the team will be renewed, and I hope the year remaining until the Chess Olympiad will be sufficient to renew the personnel.”

_____________________________________________________
Besides the obvious observation that other countries are fast catching up to the level of the elite players in Russia, one must ask if it is not time for Russia to consider putting together the ”best team” among its elite players.  That is, not just the highest rated players but the most harmonious and productive ensemble of players. Perhaps it is time for Russia to re-think the psychological aspects of putting together the team, removing the ELO as the almighty decider.
Gone are the times when a team with Karpov and Kasparov on top boards meant that the rest of the team could be (relative) slackers and Russia would still be virtually guaranteed either the gold medal or the silver in any team competition.  Today teams are more balanced and information and information technology no longer is privy just to the elite players such as Karpov and Kasparov.
It will be interesting to see what, if any, changes take place before Istanbul.  It is always possible to make changes to the team makeup without really removing Russia’s pre-favourite status in any event, but the question is how much will the RCF risk to re-strucuture its team.
SPRAGGETT ON CHESS
Share