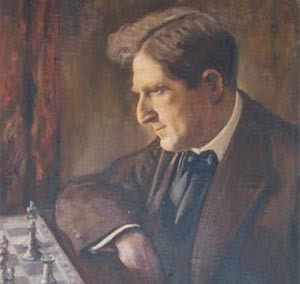 Legendary.  There is no better word to describe Frank Marshall.   One of the first great American players. His fame continues to the present day on account of his gambit in the Ruy Lopez, but his contributions to opening theory go far beyond that one idea. He was the shock winner of the very strong Cambridge Springs tournament of 1904, U.S. Champion from 1909 to 1936, one of the original five  grandmasters (at St. Petersburg 1914) , a title given by the Czar.  Marshall  is still an enormously important figure in American chess. 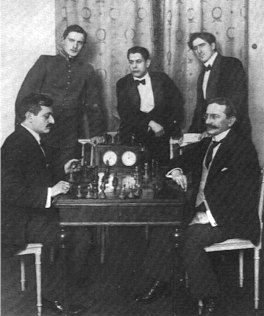 Try your hand at these examples!  They are all taken from games of the legendary American champion Frank Marshall. The ‘dot’ indicates who is to move (and win!).  Solutions can be found here.  Good luck! 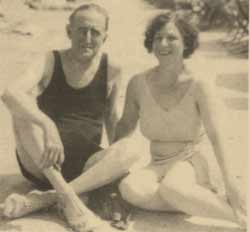 Marshall and his wife Carrie
Marshall was born in New York City but his family moved to Montreal early on and he lived there from ages 8 to 19.  He learned chess at age 10 and quickly developed into on of the city’s best players.  You can find out a lot more about Marshall’s life here.
When I grew up and first learned the game I was given the wrong impression by the Fred Renfeld books that Marshall was little more than a swindler (!).  It was only later, as a mature grandmaster, that I took a closer look at this legendary figure and discovered that he was infact an all round player with excellent technique!
It is curious how often in the chess world one’s reputation in chess is sabotaged by jealous writers who themselves are failed players.  Marshall, it is true, had a decided penchant for aggressive play and wonderful combinations.  BUT there was much  more to him than that!  I advise the reader to get a hold of ” Best Games of Chess” by Marshall himself  (formerly titled: My 50 years of Chess)
Marshall was primarily a tournament player and not a match player, as was demonstrated convincingly in his match for the World Championship with Lasker in 1907.  Althought Marshall was Lasker’s equal in the opening and middlegame, he lacked the patience and necessary polish to be able to conclude a hard fought game.
Swindler or not, no one can deny his combinative genius.  Witness his 23rd move in his game with Levitsky (1912), a move that many consider the most brilliant move ever played in chess!
POSITION AFTER WHITE’S 23rd MOVE:
Marshall

Magnus Carlsen standing beside a bust of Marshall at the Marshall Chess Club in NYC.
Before leaving Marshall, it should be mentioned that his chess club still exists to this day and is one of the most active chess clubs in the US.  It even has its own website.  Originally called the Marshall Chess Divan (founded in 1915) the club moved around in the early years before finding its permanent home at 23 West 10th Street.  There is hardly a single grandmaster in the world who passes thru NYC without visiting the club!
[youtube http://www.youtube.com/watch?v=GtJfSAWXkKE]
SPRAGGETT ON CHESS
Share