Some of today’s examples, rather than models of tactical ingenuity, show how easy it is to make mistakes or outright blunders.  Chess can be a cruel mistress (as they say) and no matter how many good moves one makes, our fate is more often decided by our mistakes and blunders.  Especially, our last one! 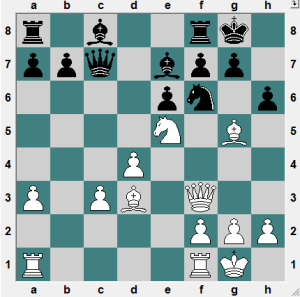 Serbia CH ,Subotica  2014.4.12  Position after 35 moves of play.  Black stands a bit better (the White King is open to attack) but with correct play White should not be in any danger of losing.  Probably 36.Nb4 (with the idea of Nc6 and harrassing Black) is the correct way to proceed.  HOWEVER, White blundered , playing an obvious move: 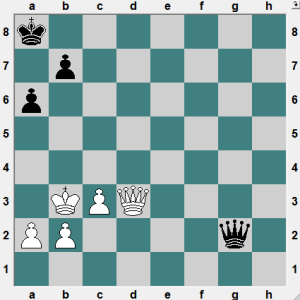 Also from the Serbia CH, Subotica   2014.4.11 .  Position before Black’s 46th move. White has an extra pawn, but because everything is on the same side of the board and Black has no weaknesses whatever, the game should end in a draw with normal play.  Praxis has thousands of such examples on record, and while the stronger side does occasionally win, it is usually because he gets considerable help from the opponent.

HERE probably Black should just play his Queen to a safe square (h1, h2 come readily to mind), or just a King move.  INSTEAD, Branko let his guard down for a single move and resigned the next move: 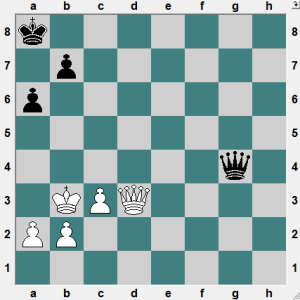 ONE OF THOSE DAYS…

BUT, the truth is that White won this game!

(Moral of the story:  one bad move cancels out a dozen good moves!)

Serbia CH Subotica   2014.4.14   A really nice tactical execution by the winner of the tournament!  White has misplayed the opening ever so slightly, but something that can have the  gravest consequences when playing against the Benoni.

Also from the Serbian Championship, 14- 4-2014. Position after 29 moves of play. White has an obvious positional advantage, the most prominent being the open a1–h8 diagonal, a path directly to His majesty’s residence. The immediate 30.Qc3 can be met by 30…Ng7! (30…Bg7? 31.RxN+!). Therefore, the strong Serbian grandmaster Sedlak played the immediate:

There is no good defence , and perhaps some grandmasters would even resign here with the Black pieces….

This rash move gives Black the opportunity to change things: 33…Qe4!, threatening mate on g2 and attacking the Rook on b1. White would be suddenly lost!

INSTEAD, Black did not see it!

Moral of the story: all is well that ends well!