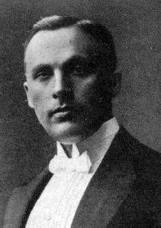 Today’s examples are all taken from the games of  Grandmaster Efim Bogoljubov (1889–1952).  At Bogo’s best, he was a candidate for the world championship, having beaten virtually every top player in the world.  Enjoy!

Mannheim  1914 .  Position after 17 moves of play.  It  fascinates me how sometimes such strong players can fall for such cheap tricks as happens here.

Geteborg  1920   Position after White’s 7th move (7.Nbd2?).  Amazing!  Tarrasch was one of the top 5 players in the world for decades and here makes an elementary mistake in the first moves!

HOW CAN BLACK GET A BIG EDGE?

Bled, 1931.  Position after 12 moves (Black’s last was 12…b5).  Black made a quick calculation on his previous move, one unfortunately for him, falls for a very devilish trick.   I remember years later that Karpov used this same idea to defeat Boris Gulko! 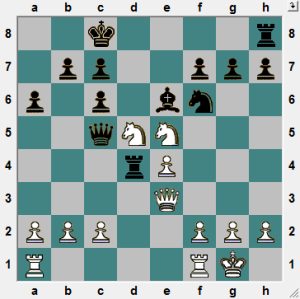 Triberg  1934  Position after 14 moves of play.  All of those pieces in the centre…something un-natural about it!  (I have never trusted so many Knights in play.)

St. Petersburg 1914.  The Russian Championship (not the great international tournament)  The youthful Alekhine had just played 21.Qg5?, a subtle imprecision that costs the future world champion the game.  But we can forgive Alekhine for not seeing Black’s brilliant reply!

PS.  You might want to take a look at this BBC article (dated Jan 9 of this year) to get a glimpse of what St.Petersburg was like back in 1914 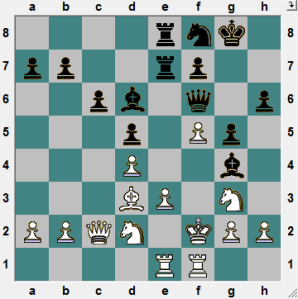 Triberg  1921   Position after White’s 18th move (18.Kf2)  Something has gone wrong with White’s hoped-for Kingside attack and now the White monarch finds himself having to do menial work.  Bogoljubov is not impressed…

New York, 1924.  One of the most famous positions in modern chess tactics!  Used often to demonstrate the attacking chances of Bishops of opposite colours, as well as weakness on the back rank.  Are you up to it?