“Nothing but truth is immortal.”

― Robert G. Ingersoll, The Ghosts and Other Lectures

PACO ON A ROLL… 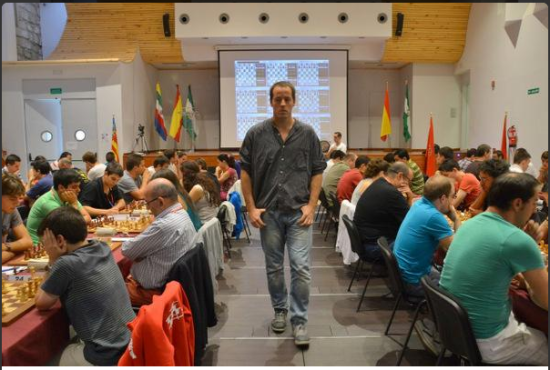 Spanish superstar Paco Vallejo is on a roll at the Spanish Championship currently underway in Linares.  He stands alone in first place with 5 points from 5 games, yesterday winning a fine combinative game against up-and-coming star Angel Arribas:

Position after White’s 13th move (13.Bg5), attacking the Black Queen.  This is a relatively obscure theoretical line of the Queen’s Gambit Accepted, considered somewhat risky for the Black pieces, but one which no doubt the young Arribas felt was a good try when fighting for first prize.  Here both 13…Qc7 and 13…Qb8 are usually played. Arribas prepared a surprise for Paco:

It is easy to criticize this move as it leaves Black’s King in a precarious situation, but against a lesser player Black’s strong centre could have proved beneficial.  When preparing surprises in complicated lines in the opening, using a computer can often leave one with overly optimistic evaluations.  Paco’s play in this game gives the reader a very positive impression..

Essentially the refutation of Arribas’ opening!

Now White has a choice between the game continuation and the direct 18.Qh5+ Kd8 19.Nf7+ Kd7 but this latter continuation did not seem entirely clear to Paco at the board, though there can be no doubt that after 20.Rxe6! White is better.  Paco’s move is more convincing:

It is the sign of a great player to be able to reduce a complex and messy position into something technical and straightforward.  Relatively best now appears 19…Bd5 when  20.Qxd5! exd5 21.Bxf6 Kf7 22.Bxe7 Bxe7 23.Re5 though Black has little chance to hold the ending. Arribas decides to take his chance in the middlegame…

Vallejo does not let up the pressure!  Ofcourse Black should not take the Bishop as 21.Rxe6 is immediately lethal.

It is curious to notice for how many moves the White Bishop on g5 is left dangling…The immediate threats include a check on h5 and taking the Rook on a8.  Black can only do the best he can and hope that Paco overplays his hand…

After the plausible 25…Rg8 White has a forced mate starting with 26.Rxc8+!  A flawless performance by Vallejo and a very important lesson for Arribas about risk and reward.