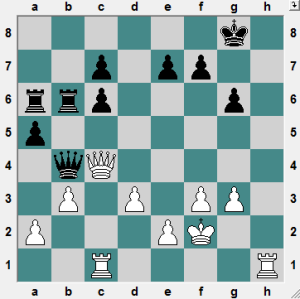 Canadian Junior,  Toronto, 1974.  Position after 24 moves of play. This game was played at Hart House,Toronto, the first of several national tournaments that I participated at that popular location (even today the Hart House Chess Club is active and alive!).

In the position above, White has a clear positional advantage, Black’s pawns, especially, are a serious problem.  However, a minor detail should not be overlooked: the open h-file.  Is it out of the question that while all of Black’s pieces are tied up on the Queenside, some danger lay in store for the Black monarch?

Spring Open, Montreal 1973.  Position before Black’s 31st move. Material is even, but Black has the more active pieces.  More over, his passed pawn on e3 is a monster!